close
A day that drags 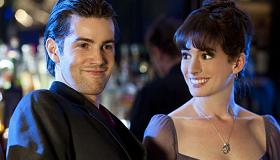 An Education director Lone Scherfig and writer David Nicholls join forces to bring his well-received novel, One Day, to the big screen. In theory, this should be a perfect mating of director, screenwriter and story. The dismal reality is that this romantic drama is a disaster, a dour When Harry Meets Sally that tries to jerk tears out of the story of a man and a woman who go from friends to lovers. What might have read well on the page comes across on film as underdeveloped, and worse, completely false. Stars Anne Hathaway and Jim Sturgess are utterly wasted and it is no wonder that the movie is sneaking into theaters in the traditionally underwhelming month of August. Fans of the book, the director and the stars may turn out opening weekend, but expect the crowds to thin once word of mouth circulates.

Hathaway's Emma Morley is socially awkward, a fact telegraphed first by her bad hair—she hasn't looked this frumpy since Mia Thermopolis' pre-makeover days in The Princess Diaries. Emma narrowly manages to hookup with gorgeous cad Dexter Mayhew (Sturgess) on university graduation day, but she kills the moment putting on a Tracy Chapman record before closing the deal. Despite her musical faux pas, a friendship between the two is born that somehow lasts through his womanizing career as a TV presenter. In turn, she very slowly blooms from an unhappy London waitress to a best-selling author of young adult novels, all the while nursing an unrequited love for her Dex.

The story's conceit is that the movie only updates us on Emma and Dexter's lives every July 15, St. Swithin's Day, from 1988 onward. The trouble with that device is that every time something notable happens on the day it feels forced and entirely too coincidental. It especially works against One Day's climax, an event further sabotaged by Nicholls' heavy-handed writing. A moment that ought to tug on heartstrings instead feels as baldly manipulative as a bad first date.

The story's one constant is Emma's love for Dexter. Despite his affairs and her own romance (clearly settling) with an affable but unfunny comedian (Rafe Spall), It just won't die. Just what she sees in Dex is never apparent. He's cute, but his surface charm does little to disguise the fact that he's a jerk, the type of guy who cuts short a visit with his cancer-stricken mother (Patricia Clarkson) in order to attend a film premiere and doesn't think twice about being casually cruel to Emma. Hugh Grant in his prime might have been able to sell this rake through the sheer force of his charisma, but Sturgess burns at a lower wattage and his Dex is rarely likeable, especially in the vital early scenes that establish his unlikely alliance with Emma.

Hathaway has her own struggles with an underwritten role in which the evolution of her clothes and hair-she eventually transforms into a swan with a chic bob and even chicer clothes-substitute for actual character development. We're not even sure how she emerges as a best-selling author. Ian tells her how much he likes her poetry and the next thing you know she's a tween fiction sensation. Apparently, she has to succeed in proportion to how much Dex fails in order for the relationship to achieve equilibrium. But that theory gives the sloppy writing too much credit. Scherfig is a talented director. She has a talented cast. They all deserve better than this lazy drivel and so does the audience.