close
They came, they saw, they conquered

Rise of the Planet of the Apes 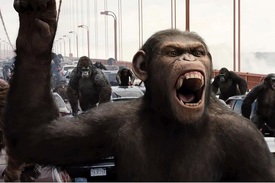 It's ironic that Rise of the Planet of the Apes—a melancholy prequel about the origins of the ape uprising—is more humanistic than the rest of the Planet of the Apes series. Andy Serkis, Hollywood's preeminent performance-capture actor, lends more dimensionality to his abused, empowered chimpanzee Caesar than any of the ape's human counterparts have, even the hard-working James Franco. With only the comedy counter programming of The Change-Up blocking its path, expect middling-to-strong returns for the effective (but not eagerly-anticipated) film, which with patience should flourish as Apes fans and newcomers alike spread the word about its emotional and technical virtuosity.

James Franco (127 Hours) plays a genetic scientist working day and night on the cure for Alzheimer's, and by extension, the cure for ailing father John Lithgow, a former music teacher who's forgotten how to play the piano. Using chimpanzees as test subjects, Franco concocts a potential cure that radically improves ape intelligence, but when his star creation wreaks havoc on the test facility, boss David Oyelowo orders all of the animals be put down. Franco rescues a baby chimp named Caesar (Andy Serkis, playing every stage from infant to fully fierce adult) and raises him in secret after discovering that he inherited the cure from his mother. But Caesar's life ain't easy. After eight years of living as a human, Caesar learns his true identity, befriends others of his kind, and determines to take revenge on the humans who controlled his life.

No matter what you think of the effectiveness or authenticity of the CGI that transforms Serkis into a chimpanzee, even merely on the page Caesar was already the most fully-realized and complex character in any of this summer's blockbusters. We literally see him form loyalties to human beings, mature, and then be shaped by circumstances into a leader who demands retaliation in a war between man- and monkey-kind. It's not wholly original to make an animal the protagonist of a film and pit the sympathies of a human audience against themselves, but screenwriters Rick Jaffa and Amanda Silver expertly create a compelling quandary that forces viewers to acknowledge that this is no conventional hero-villain conflict—their empathy is shorn on the thin genetic line between man and ape with both sides getting an even deal. Caesar is the fulcrum of that ambiguity: he's loved—and abused—by humans, yet he sincerely desires a family he can trust, and that need drives him both to and away from the humans who give him shelter.

Surprisingly, it's the human characters that are the most poorly-developed, Franco is largely alone in his efforts to make mankind as likeable and relatable as the apes. Playing an abusive zookeeper at Caesar's animal sanctuary, Tom Felton sticks close to his typecasting as Harry Potter villain Draco Malfoy. As the corporate bottom-liner at Franco's lab, Oyelowo has a similar one-dimensional pragmatism. His key word is "money," and it's why he both shuts down Franco's experiments and later launches them anew despite the scientist's cautions. And as a veterinarian who wins Franco's heart, Freida Pinto is given little to do other than look mildly disapproving of his heedless pursuit of a cure—mind you, she looks great doing it, but surely she could do something more than be the Very Pretty Voice of Reason.

But the special effects that create the apes are some of the most impressive ever put on screen. Not only did director Rupert Wyatt have to create the physicality and emotionality of a creature similar to Peter Jackson's Kong, he had to do so literally tenfold, turning one believable animal into dozens. Along with animators WETA Digital, Serkis is the missing link between the two films. Using his experience with performance-capture, Wyatt constructs sequences that integrate the CGI animals so seamlessly that we never question their existence, even when they're interacting physically—very physically—with human beings. Unlike most spectacle-driven stories, there's no conspicuous divide between CGI versus practical effects shots, nor cutaways to money shots that can only be created with ones and zeroes. The story has a strong propulsive momentum, but the filmmakers' technical proficiency creates an immersiveness ummatched by anything else on this scale.

Compared to this summer's grab bag of superheros vying for a franchise, the apes rise (pardon the pun) to the challenge of making us care. Watching the origins of this four-decade long-running film series unfold is a visceral and surprisingly emotional ride. And best of all, Rise of the Planet of the Apes should prompt audiences to revisit previous installments and request future sequels—and trust me, these Apes have ambitions.