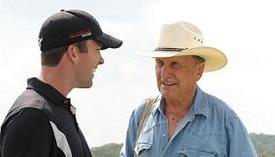 Faith is the path to true triumph in Seven Days in Utopia, a squishy Hallmark Channel-level melodrama that rarely bothers to mask its propagandistic intentions. Aimed clearly at a Christian audience, Matthew Dean Russell's film (based on David L. Cook's novel Golf's Sacred Journey: Seven Days at the Links of Utopia) layers chaste romance, clichéd father-son issues and cornball sports suspense on top of its earnest religious platitudes. All of this comes via the redemptive story of golfer Luke (Lucas Black), who, after a debut on the pro tour that ends with broken clubs and his demanding caddie daddy (Joseph Lyle Taylor) abandoning him, crashes his car in the rural idyll of Utopia. Providence is obviously what's brought him here, as no sooner has his vehicle come to a halt than sage cowboy Johnny (Robert Duvall) is at his side, taking the boy under his wing and convincing him to stay in the town for seven days, at which point he promises with the conviction of a higher power that Luke will not only reclaim his golf game, but find himself as well. To say that what follows is agitprop is an understatement, but its aggressive pandering to its devout target audience should nonetheless help it reap modest box office dividends.

Happy to take a week off from his life after his humiliating athletic conduct—he disappeared for a stretch, with no concern from his friends or family—Luke spends his days in Utopia being schooled in the ways of FST, an acronym for "Feel It, See It, Trust It"—just like every conversation, incident and scene, FST ultimately relates to the man upstairs. It turns out that Johnny was also once a tour golfer whose career was ruined by alcoholism and a lack of self-control on and off the green. This makes him the perfect tutor for Luke, who through bouts of fly fishing, painting and rodeo shenanigans comes to understand that playing things safe and calm is always preferable to being risky and ambitious. That conservatism also comes equipped with less pleasant undercurrents, specifically in Luke's eventual tour showdown with a Chinese superstar who embodies the very qualities Luke learns to reject. Yet graceless us-versus-them dynamics remain less prominent than the overriding aww-shucks syrupiness of the film's plotting, which also has Luke fall for a local horse whisperer (True Blood's Deborah Ann Woll) whose goal in life is to "bring freedom to horses" (whatever that means).

Seven Days in Utopia is awash in golden sunlight and inspirational orchestra music, a conventional aesthetic for its messages of spiritual uplift. The downy-soft wholesomeness of the entire affair, however, isn't married to anything approaching subtlety, a situation that extends to its performances, with Black doing a toothless bad boy-goes-good turn, Duvall sleepwalking through a wise-mentor routine that requires only sly smiles and true-believer sincerity, and the rest of the cast (including Melissa Leo in a role so peripheral it seems like she accidentally stumbled onto the set) asked to smile and frown with monotonous mechanization. Such crudeness is part and parcel of the feel-good action, though at least the early going peddles its faith-based messages softly. However, by the squishy finale—which involves ceremonial funerals for bad impulses, hand-to-hand bible passing and sons and fathers mending fences with ridiculous alacrity—the script abandons any pretense of restraint and, courtesy of inelegant narration and dialogue from Duvall, begins overtly preaching about God as the key to success, happiness and inner peace, in the process exposing the film as merely a star-studded, one-note sermon for the already converted.