close
A DVD kids will watch time and time again

Spy Kids: All The Time In The World 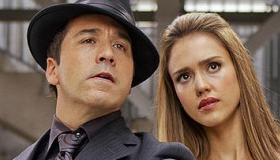 Family time is now or never for Spy Kids: All the Time in the World, a family film that pits Machete-loving Jessica Alba against two puckish but adorable step-kids to save the world from The Timekeeper, a super-villain determined to stop time and therefore prevent the world from wasting it. It's not all do or die, in fact their intentions are mostly sweet: your family is happening right now, blink and you'll miss them. (It's less neurotic than it sounds.) Backyard filmmaker Robert Rodriguez, the man behind Grindhouse: Planet Terror, invented this 100 percent kid-friendly franchise, and it tows the family line-but it's not stodgy or tired. Spy Kids: All The Time in the World is far more charming, quick-witted and high spirited than anyone could have expected...for a film that didn't screen for press. It's gimmicky up the wazoo (not just 3D, but scratch-and-sniff "Aroma-Scope" cards handed out at screenings) and it's all the better for it. Kids will drag their parents to this one in droves, and the ancillaries should outsize the box office. If they don't make a Jelly Belly smell chart for this movie, both Weinstein and Jelly Belly are seriously missing the boat!

Joel McHale tirelessly produces a reality TV show (not ironically) called Wilbur Wilson, Spy Hunter and promises his kids, "In five years, the show will take care of us all and we'll spend time together." Yet, he lacks any sleuth-skill. While he spends a year fruitlessly hunting spies, he's married to one (Alba) who does things like install and outfit a panic room under his nose. The kids are sassy: Mason Cook is hearing-impaired and coolly strong, while sister Rowan Blanchard is a mini-Alexa Vega, constantly pulling pranks and building Rube Goldberg contraptions. When Danger D'Amo (Jeremy Piven) beckons Alba from retirement to take down The Timekeeper she ushers her step-kids into the OSS fold. Alexa Vega is on hand to give the kids the magic gadgets that could save their lives, and their mechanical mutt Argonaut (voiced by Ricky Gervais) is available to them in either "Sentry" or "Attack" modes (though, for voice modes, Gervais is forever stuck in "Droll"). The action and the jokes move at break-neck speeds, compelling second viewings for kids who will have their DVD on repeat.

In Spy Kids 4, women are warriors and men freely cry about their fathers, and it's this inversion that made me love the movie a little bit extra. The archetypes here invert those Catholic tropes Scorsese favors--but before you scoff at my headiness about a film with a scratch-and-sniff card, let me say this one's offering more than gimmickry. Rodriguez is playful for sure, and jokes about electric shock gumballs and scratch-and-sniff poop-bombs are all kid-fare, but he's is clearly mining deep parental anxieties. Yes, the baby's toxic farting is a dangerously low brow joke--lower even than the scratch-and-sniff "Aroma-Scope" card that smells entirely of dollar store Strawberry Shortcake knock-off (with the exception of #6, which smelled vaguely of chocolate). But the film's almost TeleMundo level of cartoonishness fits its desired target market as well as its possibly international audience--and all the while plays on the parents' concern they'll miss the totally great gadgets they themselves invented (their kids), and by the grace of more magic than any MI-6 copycat. Future entries in the franchise seem highly likely.

(p.s. About #6--that one's reserved for the baby's first meeting with the bad guy.)