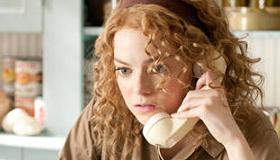 The Help begins just before the onset of Civil Rights in the romantic milieu of upper class Mississippi. Eugenia "Skeeter" Phelan (Emma Stone) has returned from university, unfashionably toting a diploma instead of a fiancé. Her friends, society mavens all, group to play bridge; it's a thin veil to cover their real careers: banishing outsiders, rumor-spouting and indirectly humiliating their "help," the black maids found in every respectable home. In this highly civilized universe, domestic glamour and social order obscure the indignities required to support them. The glittering cast, femmepowerment message and almost inspiring depiction of successful social struggle make The Help an easy sell, so you'd think the filmmakers would be a tad more conscientious about the politics under the surface. Regardless, audiences will be lured, believing a chick flick that trades a wedding for a cause is the best thing that ever happened to the movies.

Emma Stone is another adorable brainiac like the heady Hester Prynne she played in the star-making Easy A. Here, she's a writer who's ignored her romantic side in service of her ambitions (hair and make-up frump her up mightily). Skeeter may be "plain" but she's comfortable in the social circles of Jackson, where all her high school friends look to her to write their society newsletter. The villainous Hilly Holbrook (Bryce Dallas Howard, grossly inverting her role as a naïve abolitionist in Lars von Trier's slavery parable Manderlay), is the picture perfect Beelzebub behind all of this in-crowd's activities. Her maid Minny (Octavia Spencer) furnishes her events with food so good it's legend around town, but Hilly still mercilessly insults her by pushing a bill to require outdoor toilets for colored help and counting toilet paper squares to make sure Minny isn't sneaking off to use her loo. As Hilly pesters Skeeter to write an editorial supporting the toilet bill, Skeeter's pestering another maid, Aibileen (the incomparable Viola Davis), to tell her about her experiences raising white children for a newspaper article. Once the Civil Rights movement starts to boil over, Skeeter's testimonials multiply and her article grows into a book she hopes to pitch to a New York editor (Mary Steenburgen), which could open doors that lead away from her deeply conflicted home. Aibeleen and Minny risk everything to tell their stories and an unconvincing romance shows us that Skeeter, too, has something to risk for her efforts—but that hardly matters because outside of a predictably epic performance by Viola Davis, absolutely no one involved seems to have any sense of the stakes.

A chick flick for do-gooders, The Help suffers from a malady common to the discrimination drama: its treatment of inequality is more condescending than the prejudice it aims to remedy. The racism identified in this well-intentioned melodrama is mostly social indignity with the occasional threat of theoretical violence. (Racially motivated violence was very real and in what looks like the interest of discretion, the film has turned that real violence into theory; the one scar we see in the whole film is caused by an abusive husband.) To be abrasively fair, the film can't help pantomiming troubles. All the young cast can offer is abstract empathy. When Bertollucci made his fascism cautionary tale The Conformist, set during the rise of Mussolini, he said the 1930s was so far from the times known by the production they had to base the look of the film on the cinema of the Depression. As a result, The Conformist was a shining beacon of that day's issues in yesterday's nostalgic clothing. Here, the equation is reversed, and we have the problems of yesterday in a package easily mimicked with resources from the nearest thrift store (not to insult the production design, which is gorgeous). But insight is missing across the board. When Skeeter's barely established boyfriend breaks it off because "things were fine how they were" before she went and wrote this book, it's a quarrel as sophisticated and illuminating as a junior high book report—if that.

Though it's possible for a man to aptly portray cunning women, writer/director Tate Taylor is no George Cukor. I hesitate to criticize two-dimensional characters in a melodrama, but this sorority of bad mothers and conniving maidenheads is little more than a tacky regurgitation of already lame Southern stereotypes. Additionally the film bandies in a ridiculous amount of bathroom humor. I have no idea why people think women are into this.

Ultimately, The Help is a missed opportunity. Emboldening a summer chick flick with a message is a great mission and an efficient way to raise awareness. I think The Help is trying to turn candy cinema into what New York Times essayist Dan Kois called "cultural vegetables" (which, now that I write it, sounds like something done in most Southern cuisine). But these candied yams aren't as nutrient-rich as they appear and they leave the audience with ethical indigestion.