close
The heart is the strongest muscle 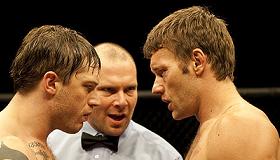 Gavin O'Connor's Warrior focuses on Tommy and Brendan Conlon, pugilists and estranged brothers who duke out their sibling rivalry in the MMA ring during a million dollar battle royale. Boys working out their issues with their fists and feet isn't a particularly original metaphor, but Warrior makes some unexpected choices that allow the film to punch above its weight. Already billed as 2011's The Fighter, the film is capable of captivating a large and mixed audience that will come for the striking in-ring fights, but will tell others to buy a ticket and take the pulse of the film's unbelievable heart.

The film follows the divided Conlon brothers, former wrestlers and brawlers who have grown into two very different men. Eldest brother Brendan (Joel Edgerton in a heartbreaker of a performance) has become a family man married to his childhood sweetheart (Jennifer Morrison) with two little girls at home. Brendan swore to his wife he'd leave the ring. Now he makes his paycheck by teaching high school physics, but these days that paycheck isn't nearly enough and he's clandestinely clobbering his way into in glorified backyard brawls for extra scratch. Brendan doesn't know that his baby brother, Tommy (Tom Hardy, sad-eyed and pumped up on drugs and swagger), has returned to their hometown after many years of separation. He also doesn't know that Tommy has quickly become an Internet sensation after beating the crap out of a local MMA champ in a clip immortalized on YouTube. And he definitely doesn't know that to win all the glory (and cash), Tommy is training with their father Paddy (Nick Nolte)—a chilly alcoholic (now addicted to audio tapes of Moby Dick) whose many sins triggered the boys' estrangement.

The first two-thirds of the film are build-up until the moment when Tommy and Brendan finally square off in the same scene. Until then, O'Connor cuts between Tommy training at a local gym and with their pop while refusing to exercise his forgiveness muscle while Brendan finds himself with enough free time to really give fighting another shot. Training under the Zen-meets-Ed-Hardy tutelage of his old pal Frank (Frank Grillo), it looks like the impossible may happen. Like Rocky emerging from the ashes, Brendan might make it to this self-described "Super Bowl" of MMA fighting and fight his own sibling, two broken brothers finally meeting in a ring built solely for destruction.

Of course they're going to fight each other. The film's central conceit has been marketed to high heaven, and, rest assured, MMA commentator Bryan Callen does crow that line from the trailer when announcing to the stadium that the contenders "Arrrre brothhhherss!?" Yet Warrior is not just about the relationship between Tommy and Brendan. It's quite the opposite, with the brothers' bond forming only one link between the Conlons, a tangle of familial ties that impacts every character in the film—not just brothers, but father and son, husband and wife, mother and child. And though it's no secret that the brothers reunite in the ring, it is a surprise that O'Connor takes so long to get them there. And it's an even bigger surprise that this almost-twist so confidently ramps up the emotion and anticipation that it gives Warrior the thrilling suspension-of-disbelief of Rocky.

The film does, however, falter as it thickly lays on an unnecessarily twisty back story for Tommy, an ex-Marine on the run from something mysterious. The extra script padding jacks up Tommy's motives to a size that's the emotional equivalent of Hardy's gorilla neck, but it still feels unnecessary. As a character, Hardy plays Tommy with such ferocity that it's easy to understand why he'd find himself back in the ring: Tommy is a fighter. Period. But his past affords him an unexpected fanbase, even though he's the last man in the competition who cares what other people think about him, which makes his rise as competition favorite seem just sort of silly and tone-deaf—one of the film's few missteps.

The final third of Warrior is loaded with some of the finest fighting sequences in recent memory, energetic and engaging bone-crushing affairs, battles that inspire real tension, even when the film's trajectory has proven to be relatively obvious. Yet, it takes a while to get there, as the film clocks in at 139 minutes, and would surely benefit from a few snips to get it down below two hours. Lopping off some of Tommy's story would trim some of the weight and get the film much faster to its much stronger second half.

Though Warrior excels at the big stuff—fighting sequences and rousing crowds and victories that all but force audiences to stand up and cheer—the film is at its very best in the small moments, the little looks, tiny flickers of what's lurking underneath that beastly Conlon rage. When the brothers Conlon finally lock eyes on each other across a crowded room, it's a rare, finely tuned moment, one that any film with any sort of dramatic hook would be lucky to have within its frames. It's a real gut punch and Warrior's got the muscle to leave a mark.