close
The sparks dissipate in this Weekend 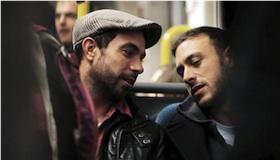 Multi-hyphenate Andrew Haigh's Weekend focuses squarely on that titular time period shared between Russell (Tom Cullen) and Glen (Chris New), two young men still navigating what their sexual orientation means in the context of sparking intimate relationships. Though the film benefits from an easy chemistry between the leads, it never hits any of the highs hinted at early on, leaving audiences unfulfilled by the possibility of what might have been. The sexual honesty of the film, however, should garner some affection from Generation X and Y audiences looking for a more realistic and gritty take on modern romance. It will likely draw a small group, but positive buzz from festivals aren't likely to catapult it to the top of the limited release heap.

The film opens with Russell readying himself for a night with friends, but his insistence on getting high alone before hitting the house party and his subsequent tardiness show how little he truly cares about fitting in with his usual crowd. Haigh doesn't let that hint at Russell's character dangle though, using the first moments of the film to train the camera squarely on him, pulling him into focus while everyone else simply fades out. After muddling through the party, barely cracking a smile, Russell slinks out and finds himself alone at a gay bar. The film pushes Russell as "different" but Weekend is open to more than the predictable possibilities—and Russell is too, waking up the next morning to find the brash and funny Glen in his bed.

The two open their Saturday morning with an easy chemistry that glosses over the inherent awkwardness of waking up next to someone who is, despite whatever physical acts you may have committed with them, basically a stranger. As the skittish Russell settles back into bed Glen whips out a tape recorder and tells Russell of an "art project" he's attempting, one that involves Glen's conquests to tell the tape recorder the tale of what has recently transpired between the men. It is, unfortunately, only the first of many cheap conceits that Weekend breaks out in an attempt to gussy up the film's storytelling momentum.

The film does attempt to illuminate the struggles of both men (and, on a wider and more shallow scale, those of homosexuals everywhere) in coming to grips with how their sexuality defines them. While Glen appears to be comfortable with himself and his sexuality, he gradually reveals to Russell that may not be entirely true. Russell's struggles appear and remain internal; unlike Glen, he's never had parents to come out to, and his best friend Jamie proves his understanding and support to almost outrageous levels. Russell confesses to being uncomfortable the moment he comes in to contact with other people, which makes it bizarre when he confesses to his own art project of sorts, one that reveals that Glen's initial thoughts on Russell's experience level are wildly off-base.

Russell and Glen spend a fitful weekend together, with both revealing personal details over time, ostensibly crafting a tenuous intimacy, but one that never sees expansion beyond their first morning. Whereas Russell and Glen's first daylight moments together feel genuine and unique, that intimacy and chemistry simply never deepens, even while all the onscreen clues attempt such. Russell and Glen share stories and drinks and kisses and line after line of needless cocaine, but the film's aim—to show how one weekend together can change the two men forever—doesn't hold. No one walks away from Weekend feeling any different, neither the audience nor the leads.

The film was made on a shoestring budget over a period of just 16 days and with a tiny crew of 15 people. Haigh chose to shoot the film in story order, which only makes the lack of progression and growth that much more disappointing. While Cullen and New are able to hold attention, particularly when the two men move into more bold sexual interactions in between their stabs at anecdotal and conversational intimacy, Weekend as a whole still feels monotonous and unsatisfying. While there should be consequences and weight to Russell and Glen's story, Weekend is as fleeting and important as an ill-advised one night stand.