close
Best wishes from slippery shores of the psyche 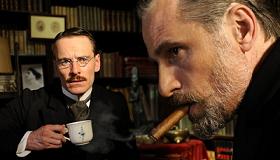 In chilly Victorian Zurich, Carl Jung (Michael Fassbender) is hot. A young upstart, he begins practicing Sigmund Freud's experimental "talking cure" (aka psychoanalysis) on his new patient: the educated but unhinged Russian aristocrat Sabina Spielrein (Keira Knightley). Based on the play The Talking Cure adapted by screenwriter Christopher Hampton, the flick is a view of our perpetually nascent relationship to medicine, and particularly the study of consciousness. Yet the famously visceral director David Cronenberg must still apply his goopy stamp. This prestige pic is poised for the sort of surprised, congratulatory attention Cronenberg enjoyed for his relatively restrained The History of Violence, with the true-ish historical heft adding to the film's cache.

When she's admitted to hospital, Sabina looks raving mad—writhing, screaming, laughing, mud-flinging—but insists she's sane. Jung's wife Emma (Sarah Gadon) is the first to suggest the grande dame for the new treatment. Bad move, babe. What happens if the beautiful Sabina is cured and already has her hooks in Jung's mind and libido?

Michael Fassbender (Fishtank, Inglourious Basterds) is reliably great, severely outclassing costar Knightley's grating performance. Her Russian accent is formally convincing but that's essentially where the believability stops. As Jung, Fassbender buries his charisma under his character's lack of confidence—he's an authority to his patients, but an inferior to just about everyone else. Additionally, this practice of treating a patient through talking puts more power into the hands of the afflicted than the usual dynamic of doctor as unassailable hero. This mutually empowering new method puts it and its practitioners on culturally shaky ground, and the old guard wants to discredit it. Creator Sigmund Freud (a beautifully precise Viggo Mortensen) cautions Jung that his soft spiritual tendencies could damage the reputation of psychoanalysis. But more damning than Jung's open-mindedness is his attraction to his patient-turned-pupil—verboten long before there was a Code of Ethics.

After Sabina admits that her father triggered in her an arousal to spanking, Jung lets her assist him with his tests. And since his wife Emma is one of his test subjects, Sabina uses her privilege as both woman and professional to build a wedge between the couple. Somehow, the secular space of the workforce liberates Sabina of her sexual anxieties—and with her in the office, it has a similar effect on Jung. It doesn't hurt that she's getting the inside scoop on his passions. When asked about sex with his wife, Jung calls it "tender." Counters Sabina, "With me, you should be ferocious."

Another threat to Emma's marriage is Jung's thick, deep bond to Freud. The patrician doctor sees the danger of Jung's need to wedge a little religion into his analyses—and a little of himself in his favorite former patient, if you know what I mean. Meanwhile Freud and Sabina are anxious about the first ripples of anti-Semitism that threaten their professional security.

Yet, despite the way characters are divvied up into the tidy archetypes of father and son, daughter and dad, wife and woman, that Jung would make famous, you can still feel Cronenberg under the surface trying to bring forth the messiness of human behavior and body fluids. In one moment on the bank of a river, Jung tells Sabina how unsatisfied he is with his wife and his work. As the doctor self-indulgently wallows and she quietly listens, Cronenberg cuts to the river as it glosses the smooth rocks beneath them, recalling the slickness of the sweating Knightley, the wet and bloody show of her deflowering, the inextricable union of the body and the consciousness. The tide tugs on these confusing animals, and even though they're now standing still, their next moves will bring poetry and brilliance and disaster.