close
Stolen: Your time and money 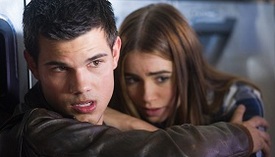 The new film Abduction has a lot of problems, but the biggest is the fact that no one gets abducted. Ever. That it fundamentally fails to even live up to its title is a testament to how unbelievably—and consistently—dumb is this action thriller clumsily directed by Boyz n the Hood auteur John Singleton and starring hard-working but monosyllabic Twilight heartthrob Taylor Lautner in his first lead role. Evidenced by the adulation heaped upon the Twilight films by their fans (regardless of quality), the box office prospects for Abduction are strong, although it seems unlikely that older audiences will be as eager to see Lautner become a bona fide star.

Lautner plays Nathan, a Pennsylvanian teenager who, despite his stable home life, is plagued by violent nightmares. His therapist, Dr. Bennett (Sigourney Weaver) assures him that they're the byproduct of typical growing pains, but when he discovers a photo of himself as a child on a missing persons website, he isn't so sure. After confronting his mom (Maria Bello) about who he—and they—truly are, he goes into a tailspin with only his cute neighbor Karen (Lily Collins) as comfort. But when two men show up at his house and threaten his family, Nathan and Karen are forced to go on the run from a group of international terrorists and the CIA for reasons they don't know.

It's hard to know what's worse in Abduction: the writing or the direction? But both of them appear to be in a no-holds-barred competition for top nominations at next year's Razzie Awards. According to Sean Christensen's script, we're supposed to believe that a terrorist organization created a website to lure a kid out of hiding so that they can capture him in order to flush out his real parents—and worse yet, that this plan almost works. While I won't spoil how or why Nathan was placed with foster parents, the film treats this information with a shocking lack of gravitas, but then again, the actual reason is so stupid that it's probably better that the moment of revelation is underplayed.

If Lautner's dubious acting abilities didn't already make caring for his character an uphill battle, Nathan is written as a spoiled, petulant and weird kid. Mind you, most teenagers are, but Nathan exists in a special his own special echelon. He starts off as reckless and immature, and rapidly becomes just plain stupid. For instance, after he experiences firsthand the CIA tracing his call from a pay phone, he not only agrees to let Karen make her own call to her family, but worse, gets on the phone himself after it's been established that her call was also tapped. Thanks for giving your enemies ample time to trace your location. Numbly point-blank lines of dialogue like, "Are you my mother?" do little to establish the existence of critical thinking skills in Nathan's pretty little head—Christensen's script gives a one-dimensional actor just a half-dimensional character, and the results are exponentially awful.

Meanwhile, the coincidences required to advance the plot are staggering, starting with the fact that Nathan gets a random class assignment on "websites" that randomly pairs him with his dream girl neighbor that leads him to randomly discovers a missing persons website that triggers him to randomly write the website just randomly ten days after one of his relatives stole a critical piece of intelligence that just happens to be why everyone is looking for them (and him). A Radio Shack's worth of technology has been invented that allows Nathan's pursuers to watch, listen or keep track of him almost anywhere he goes, and key people very often seem to be paying attention at exactly the right time to hear Nathan confess an important piece of information, or reveal his precise location.

And it gets worse. Don't get me started on the trucker who volunteers to take Nathan and Karen to another state. And definitely don't ask me to explain why he just so happens to take with him the one object that everyone wants, even though when he takes it, he doesn't know what it is nor why they're after him.

Singleton's direction is equally incompetent. It opens with a panoramic view of Pittsburgh that eventually discovers a sole car on a road obscured by trees—it looks like an epic establishing shot from a better film that forgot what it was supposed to be establishing. The camerawork feels culled from a variety of disparate sources, including second and third-unit photography that never bother to communicate with the first. In an early scene where Nathan walks out the front door just as Karen breaks up with her douchebag boyfriend, not even the eyelines match, making the audience wonder in what proximity do these two houses exist?

In the action scenes, Singleton uses zooms and other oddball camera moves, but he never seems to pay much attention to why he's using them, or how they fit into the rest of the photography. And later, there's a two-person exchange in a car that is so conspicuously shot against a green screen—and inexplicably, through another green screen as well—that its hazy, overprocessed imagery sticks out like a sore thumb even against other footage which scarcely looks more professionally photographed. There's barely a shot in the film that looks like it wasn't designed on the cheap with zero interest in disguising that it's just a backlot set—and that includes a climactic sequence that reportedly actually took place at the Pittsburgh Pirates' actual stadium during a real game.

Finally, the film has some really odd and inconsistent attitudes about how far teenagers can go when it comes to playacting as grown-ups. Lautner rides on the hood of a car, and later, on a motorcycle, without ever wearing a helmet. Later, he brandishes firearms in two separate scenes, but never pulls the trigger. And folks looking for some romance between Lautner and Collins will need to take a cold shower after the two of them dry-hump one another during a passionate and protracted make-out scene which is subsequently interrupted by their mutual discovery that they're both very hungry—for food.

So ultimately, Abduction only lives up to its title through the cumulative disaster of its execution: no one in the film is ever abducted, but your time and money are long gone and they aren't coming back.