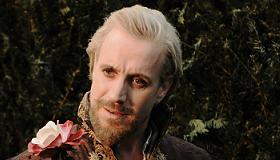 At the start of Roland Emmerich's poppy period piece, a scholar (Derek Jacobi) struts on stage and claims that William Shakespeare's father, wife and daughter were illiterate. If the world's greatest writer didn't teach his family to read, he's either a jerk or a fraud. Or both. Here, Shakespeare is a crass, brainless actor played with subversive glee by Shaun of the Dead's Rafe Spall who makes the Bard just a half-step above mouthbreather. The real author, however, is Rhys Ifans' Earl of Oxford, who looks the part: his eyes droop with world-weary wisdom, but he struts into a palace hall like he knows he belongs with the greats. Why is Emmerich, destroyer of worlds in 2012 and Independence Day, elbowing his way into the conversation about Shakespearean authorship? Because the debate is explosive—and he can't resist packing on a few more pounds of dynamite on his confident drama of incest, greed and beheadings. His need to entertain comes at the expense of toying with the facts—a good thing because it means popcorn movie fans will eat up Anonymous more than will English grad students (hey, they can't afford tickets anyway.)

Like all historical court films, the first 20 minutes of Anonymous suffer from who-is-that-Earl-again-itis: in short order, we meet all the major players of Queen Elizabeth's reign. Besides Ifan's Earl, there's William Cecil (David Thewlis), Elizabeth's scheming advisor; Robert Cecil (Edward Hogg), his mewling son; the ambitious Earl of Essex (Sam Reid); and his racquetball partner, the Earl of Southampton (Xavier Samuel). Outside the palace, there's two playwrights—Christopher Marlowe (Tristan Gravelle) and, more importantly, Ben Jonson (Sebastian Armesto)—and that idiot actor Shakespeare who they'd rather not cast in their plays if they can help it. There's a half-dozen competing schools of thought about Shakespeare's true identity: Oxfordian (it was the Earl of Oxford), Baconian (it was philosopher Sir Francis Bacon), Derbyite (it was William Stanley, the 6th Earl of Derby), Marlovian (it was playwright Christopher Marlowe) and Stradfordian (it was the man himself, the son of an illiterate glove-maker—get over it.) Emmerich's theory is this: as a young orphan, Oxford became the ward of the devoutly religious Robert Cecil who thought literature was the Devil's distraction. Decades later, Oxford asked Jonson to stage his plays under Jonson's name promising to make him one of the most famous writers in town. But Jonson already was, and he reckoned this Earl stank. So Shakespeare swooped in, took credit for the plays, and set off the great mystery of the ages.

Emmerich's London isn't a polite society of lace and good breeding. He delights in the muck, reminding us several times that the road to the venerable Globe Theater was made of mud that stuck to your shoes. Yet good breeding is one of the major subplots—here, Queen Elizabeth (Joely Richardson, and later Vanessa Redgrave) is a nymph who regularly gets knocked up only to have Cecil squire the baby away in secret and have it reappear years later in court with no knowledge of its real mother. (There's a lot of kids with her red hair in this palace.) This Elizabeth is fully alive. In her youthful love scenes, she and the young Earl (Jamie Campbell Bower) seem to glow from within. In the last years before her death when fatigue had her propping up her head with neck ruffs, she's still alert enough to send a friend to the chopping block. Hey, an execution isn't a spoiler if it's 410 years old.

Most period dramas get bogged down in capturing the details of the costumes and accents. What works in Anonymous is that Emmerich's first focus is the plot. Fleet and fascinating, he convinces the audience that this centuries-old half-true melodrama demands attention. And better, so do Shakespeare's plays which he pumps up with explosions and handmade special effects and damn fine acting. This isn't today's community theater with dentists standing around in tights—in 1596, besides bear-baiting, Shakespeare's plays were the best show in town. Through Romeo and Juliet, Hamlet and Richard the III, Emmerich cuts to the groundlings packed shoulder-to-shoulder in the pit before the stage, laughing or crying or booing on the author's cue. There's even the first instance of crowd-surfing ever recorded, unless somehow Sophocles got Oedipus to throw himself into the audience.

Above the herd in a private box, Ifans' Earl sits nervously like a schoolkid singing in their first pageant. He's unable to resist mouthing the lines, or glaring at Shakespeare when he steps out, brain churning slower than molasses, to take a bow and steal his glory. And a few bleachers over, Armesto's agonized Ben Jonson stews in the knowledge that he's the only other person who knows of the ruse. Like Salieri in Amadeus, he's cursed with being talented enough to recognize a talent that blows his away. And worse, the Earl's admission that plays just pour out of his head, all he has to do is write them down, is a splash of cold water to Jonson or anyone stricken with writers block. Emmerich is advocating for the power of art, almost like it's a natural force that can't be repressed. The Earl's unexpressed words seem to choke up his throat. Stifled plays are to him what a volcano is to 2012—fated to explode and demanding of respect. Don't forget that Shakespeare's loudest cynic, competitive playwright Christopher Marlowe, was stabbed to death in a bar. But is Emmerich making art of his own? It's certainly great pop, a slippery pseudo-historical soap opera that's a delight to watch. Will Anonymous be remembered 400 years from now? Doubtful. But if Roland Emmerich continues to be Hollywood's kookiest big budget auteur, we'll definitely know his real name.