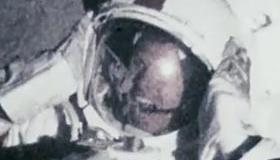 To suspend your disbelief in this found footage horror you should believe two things: first, a secret moon landing was organized by the US in 1972, and second, even though NASA's a big fat liar, you can trust a scary documentary. If you believe these points, I have a bridge I'd like to sell you. Oh, and you might just find Apollo 18 and its low-rent story of infectious alien life thrilling. If only there had been something I could believe in to be less bored. Apollo 18 is a drab horror that tries to plant fears about untrustworthy authority (Nixon, NASA, etc) that are as stale as freeze-dried peas. Not a frame of this inspires faith of any kind, but hey, even if horror fans find it dull Weinstein could always sell it on DVD to America's growing segment of anti-government conspiracy crackpots.

Apollo 18 takes pages out of many playbooks. The single camera shooter idea of Blair Witch is the most obvious (and yes, when things get ugly, we get a sweaty face-the-camera confessional). Apollo also uses TV actors a la last fall's The Last Exorcism—but the Weinsteins put a spin on the "cast of unknowns" premise by refusing to release their names (they were an "unknown cast"). The actors are probably grateful for that one, but it was a savvier marketing ploy than the studio likely realized because some movie sites have the built-in database habits of filing any film without cast members as a "documentary." As "documentaries" go, this one resembles a film I saw a long time ago called Plan 9.

The framing story is simple: after 17 moon missions, the last in 1972, three more were planned and halted "for budgetary reasons." The implications of the budget stoppage should be the expense of the Vietnam War but the filmmakers never make that association. (Could the film's subtextual Tea Party politics not stomach a statement damning war?) Watergate is only invoked once, and almost apologetically, to establish the possible dishonesty of the Department of Defense. But notions of media, lost and found, are built into the film, along with the reference to Nixon's 18 minutes of missing tape. Ultimately, the real value of mentioning Watergate was to transmit some textbook vocab to the kids in the crowd (there will pretty much only be kids in this crowd).

There are three cosmonauts on Apollo 18 and their mission is so secret their families think they're on a short training operation. When America has 840 lbs. of moon rock, why is the mission to collect an extra 50 lbs. confidential? Apparently, having "the right stuff" means not asking that question. When they find the body of a dead Russian cosmonaut and one of the two Americans begins screaming, you forgive them for racing the guy back onboard. I mean Alien wouldn't come out for another seven years.

Quickly, signs of infection emerge. And at the same time, a cluster of excitable moon rocks starts to mobilize. What the astronauts can't see, NASA's cameras can. Cameras located outside indicate ghostly blotches of air and sunspots, and a line of dialogue justifies the appearance of excessive "Westinghouses" (cameras) in and around the ship—these guys even have them strapped to their chests. And they're capturing footage at a rate that surpasses the facebooking speeds of tech savvy teens. In fact, the film's worst anachronism happens when a cosmonaut doesn't inspect his sickly colleague, but instead holds a camera to his face and interviews him like someone weened on reality TV. What, was he thinking in 35 years, future scientists could diagnose his friend's gangrene-like wounds on YouTube?

At the risk of sounded jaded or grumpy, the subtext here looks self-defeating and cowardly. The message is: "Don't explore." I guess we kinda get why, but for a film that claims to be pieced together out of 84 hours of footage, there's a lot of unclear action. Plus, there's a sync delay between the sound and the image added to sell the film's age. At least that means Apollo 18 can be easily subtitled for international markets. Hopefully the distraction of reading will prevent foreign audiences from falling into the massive plot craters.

A post-script tells us that of America's 840 lbs. of moon rock, most has been given to dignitaries as "gifts," suggesting Americans love to hand out absurdly dangerous souvenirs. This bit of logic may in fact be the film's only credible detail...and maybe its most suspenseful.