close
Put your damn pants on

Bucky Larson: Born to Be a Star 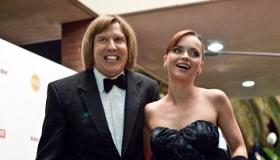 A sweet but slack-jawed throwback to the signature films from which Happy Madison Productions gets its name, Bucky Larson: Born to Be a Star chronicles the unfunny adventures of its yokel hero (Nick Swardson) as he quests to L.A. in an effort to fulfill his destiny as a porn actor, a dream complicated by the fact that his two front teeth are larger than his penis. Flatly directed by Tom Brady (The Hot Chick) from a script co-written by Swardson and Happy Madison paragons Adam Sandler and Allen Covert, Bucky Larson is an ugly piece of work, stifling the desperate talents of its cinematographer (Michael Barrett) as well as those of its perversely accomplished cast (Edward Herrmann, Christina Ricci). Young adult audiences nostalgic for a dose of amiably idiotic cinema could fill some seats on opening weekend, but disastrous reviews and Sandler's refusal to step in front of the camera should guarantee a swift exit from theaters, cuing the fulfillment of Bucky Larson's true destiny as fodder for disinterested basement gatherings on cold small town nights.

Bucky Larson goes from zero to bestiality in less than 60 seconds. The gorgeous footage of America's farmland and aerial views of shimmering crop squares gives way to the sight of a man slathering his genitals with peanut butter so that his livestock will return his affections. This is Bucky Larson's America, beautiful only from a distance. Moments later, we're introduced to the man himself as he's being fired from his clerk position at the local grocery store, let go for being kind to an old lady—old ladies, of course, the archetype guilty of inciting the plots of several Happy Madison films.

Few would argue that films like Happy Gilmore and The Waterboy succeeded by virtue of their paint-by-numbers storytelling, but their familiar journeys provided them a sturdy canvas upon which to mount their equally familiar jokes, and afforded them the shambling inertia that allows such gleefully insipid odysseys to hold together. Bucky Larson pays homage to those dullard classics in wit alone, too convinced in the appeal of its protagonist to bother having him do anything interesting or even hit the marks designed to allow this sad mess of defects to cohere into an actual character. Bucky Larson's salad bowl haircut and inability to understand even the most basic of human interactions make him seem like a hillbilly with mild Aspergers, a detriment to both communities.

As he bounces around the Valley with his golly-gosh smile, taking the industry by storm because his meager endowments make viewers feel better about themselves, the film refuses to delight in the absurdity of Bucky's situation, as if having some fun with it might taint the purity of the premise. Bucky Larson wants to be Bucky Larson—steadfastly submitting the lascivious world to its winking innocence—but it's all so confusingly stilted and coy. Director Tom Brady is enamored with the silliness of the male being, repeatedly fixating his camera on the primitive silliness of sexual behavior as if he's attempting to bond men of all stripes through a mutual appreciation of their strange form and desires. Conversely, Brady almost denies the allure (or existence) of the female body until a nipple or two are required to revive the audience. But subverting the male gaze doesn't engender empathy for the film's lead so much as it puts the entire enterprise on the defensive and invites the world to attack.

Having said that, the film's unrepentant sweetness is sincerely refreshing in this age of Hangovers and Horrible Bosses, and the sympathy that Bucky Larson's script reserves for its most pathetic characters is almost admirable. Don Johnson peps things up as the scraggly Miles Deep—a pill-popping porn director with untapped vision—and even if Ricci's character makes Wednesday Adams seem downright plausible, it's quietly refreshing that she knows of Bucky's ambition from the get-go and supports him every step of the way. Unfortunately, the film's underlying notion that schadenfreude makes the world go round is too ugly to be overcome. Even Bucky's success argues that it's okay to engage in acts of mass mockery so long as the target of our scorn is able to settle down with a beautiful girl who's succumbed to her own self-pity.