close
I've got the fever 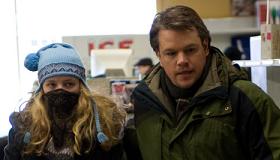 Turning something entirely possible, plausible and practically ripped from the headlines into the stuff of a suspenseful entertainment isn't easy, Yet Contagion, a crackerjack thriller about the quest of several doctors to stop a killer virus from spreading across the world, is a movie so real it's frightening—hypochondriacs may collapse from shock. This is Steven Soderbergh at his best delivering a gripping, chilling and powerful movie experience that will have audiences talking (and freaking out). If Warner Bros can effectively market this important new movie as a pure international thriller, box office returns from adult ticket buyers should be brisk—but the studio must fight to overcome the flick's cringe factor.

Though Contagion is reminiscent in some ways of Wolfgang Peterson's 1995 Outbreak, it comes off as far more realistic than the cardboard theatrics that Peterson stumbled into when he turned star Dustin Hoffman into a quasi-superhero. In other hands, this would be morphed into a formulaic disaster film but Soderbergh and screenwriter Scott Z. Burns are far more interested in the procedural aspects of the premise than on the hysterical reactions of those victimized. With an all-star cast the story starts off in somewhat shocking manner by killing off one of those stars quickly. Let's get to the sick bay: there's businesswoman, wife and mother Beth Emhoff (Gwyneth Paltrow), her husband Thomas (Matt Damon) and their young son. There's international medical experts Laurence Fishburne, Marion Cotillard and Kate Winslet racing against time to try to discover the origins and cause of this fast-moving and deadly Bird Flu-esque worldwide epidemic. And then there's loose cannon blogger Alan Krumwiede (Jude Law) who uses his bully internet pulpit to fan the flames of fear and disrupt the government's control of the crisis.

Soderbergh, shooting in eight locations around the world, keeps the pace intense. Yet, he never retreats from his mission of turning this compelling story into an intelligent thriller. He launches the disease, then builds mystery by rewinding to the beginnings of the outbreak and, ultimately, to the cause itself. The ensemble cast is brilliantly chosen and does well despite the minimum screen time doled out to each. Damon is earnest and perfectly in tune with the emotional life of his desperate father, but the standout is Law as an internet age town crier. He nails it. If talent is contagious, stick close to him.