close
Notes from the upper deck 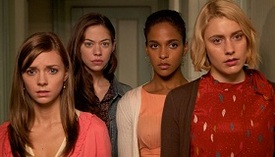 Whit Stillman's first film in over a decade, Damsels in Distress finds the director issuing another foible-laden tribute to an upper-class goldfish bowl. The story follows four quirky, idealistic female students at a half-prestigious New England university who intend to date down and improve their non-threatening, if lackluster, male counterparts—and rescue a few classmates from the brink of suicide with dance therapy. But while the scenario has all the smirking charm of Stillman's earlier movies, the sobering realities of off-campus life are never even alluded to, and the humor of insularity eventually becomes stifling. Box office performance will likely depend on how open indie film audiences are to escapist guffaws this shallow, and if the aforementioned Woody Allen's fluff grosses are any indication, the amount will be modest.

We're led around the college by a girl quartet in candy color-wardrobe—Violet (Greta Gerwig), Rose (Megalyn Echikunwoke), Heather (Carrie MacLemore), and the newly matriculated and comparatively cool-headed Lily (Analeigh Tipton). With Lily as an excuse for exposition the group introduces us to their makeshift progressivism, which includes the running of a starry-eyed suicide prevention clinic, and the social education of several bone-headed, blue-blooded male partners, one of whom cannot identify colors. In the first act, Violet has a breakdown after being jilted by her numbskull hunk Frank (Ryan Metcalf), and the laughs from then on mostly come from how these ultra-sheltered characters are doomed to fail at even failing. (Some despondent students attempt to kill themselves by jumping off a two-story campus building; they howl in pain as they sprain their joints.)

Though clearly comfortable with this level of egocentrism, Stillman awkwardly updates his usually scalpel-trimmed stereotypes by giving bit parts to nouveau comics (Aubrey Plaza, Zach Woods) and espousing a clueless prurience seemingly for the sake of appearing legitimate in a post-I am Charlotte Simmons college landscape. (Lily's foreign grad student love interest practices Cathar sexuality, which leads to a handful of wincingly clunky anal sex jokes.) The plot only lasts for about 30 minutes before dissipating into a confederacy of title card-separated sketches that involve Violet, Lily, and the piss-poor con artist Charlie (Adam Brody); one late scene exists purely so that the latter can admit, in a quintessentially Stillmanic monologue, that he doesn't understand the appeal of homosexuality given the current decline of decadence.

Unconventionally for the writer/director, these characters shrug at and make peace with their deficiencies rather than plunging into the process of shedding them piecemeal, performing a frenzied idealism that crescendos with a rainbow and a queasily honest song-and-dance number. We identified with the hyper-literate yuppies (or Urban-Haute-Bourgeoisie, as they'd prefer) of Metropolitan and The Last Days of Disco because we knew how painful their assimilation into society's cynicism would be. Over the last decade Stillman seems to have become convinced that his cozy milieus don't even need to think of stooping to brace themselves against even mundane discomforts.

Stillman does, however, negotiate one achievement with Damsels in Distress: the casting of Greta Gerwig as not-quite-protagonist and arch-kook Violet Wister. Gerwig's pithy interpersonal tactics elevate Stillman's loopy altruism with more clarity and specificity than his "shy girls," Kate Beckinsale (Last Days of Disco) and Carolyn Farina (Metropolitan) ever did. "We're all Christians," Violet says, concretizing what has up to now been only a vague ecclesiastical lilt to Stillman's universe. Violet lords over the university's suicide clinic with donated donuts that are only allowed to be eaten by the genuinely self-destructive; intends to start an "international dance craze" called the Sambola for the pure sake of spreading kinesthetic joy; and encourages male dorm hygiene by distributing a shamanic body soap she discovered while purging the pain of her betrayal in a Motel 4 (it's cheaper than a Motel 6, she points out). Violet understands what the film as a whole doesn't seem to: Not only is growth necessary for survival, but one must be "seduced" into the idea of helping him- or her- (but usually him-) self.