close
I am woman, hear me panic

I Don't Know How She Does It 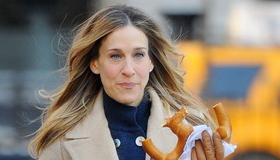 Just what is it that Sarah Jessica Parker is doing that people don't know how she does? In short: be a high pressure investment analyst, raise a toddler and a kinder gardener, charm her husband, wear high heels, keep her arms buff, brush her hair and stay sane. Actually, the last two are lies: her hair's a mess according to assistant Olivia Munn (her own hair in a cartoonishly stern bob) and Parker's mental stability is one homemade cake shy of a bake sale. Written by Aline Brosh McKenna, whose 27 Dresses left me convinced she respected modern women as much as your average Taliban warlord, I Don't Know How She Does It makes motherhood look so unappealing, by minute 45, I vowed to get a hysterectomy. (Here, pregnancy leads directly to vomiting, screwing up at work and having toilet paper stuck to your shoe.) Yet director Douglas McGrath's empathy rescues it from the brink of disaster porn—it's so good-hearted and optimistic that a swath of stressed out moms will feel the flick speaks directly to them, which it does. Though I can't imagine the rest of America will pony up to see Sarah Jessica Parker push a stroller in stilettos. Expect a solid, but small-ish box office among women who always wanted to see Carrie Bradshaw spawn.

You can expect two things from a working girl comedy and I Don't Know doesn't disappoint: one, the heroine will sprint in high heels like a racehorse one stumble away from a bullet, and two, that the uber woman will finally accept that she can't do it all—but she should still swing at least 90%. For those that never believed Carrie Bradshaw had a real career—c'mon, her columns were always tossed-off nonsense from that morning's brunch date—Parker, here, plays a reasonable facsimile of an office worker slaving under the tyranny of boss Kelsey Grammer. Kudos for making her a stock analyst when most rom coms can't think of female careers beyond PR rep or cupcake empress, though she still squeaks in a baby voice, wears her hair in childlike ponytails and apologizes every third word. When Parker is good at her job, she's really good and we enjoy watching her shine. Early on, she seizes upon an idea for a retirement fund investment strategy that causes her to have long work sessions with firm executive Pierce Brosnan, and her eyes light up when she brandishes a bar graph. But every triumph is offset by an embarrassment: she fumbles madly for her phone, dumps her purse full of pretzels out in the office lobby and arrives at a big meeting with a nasty case of lice. And as far as office sympathy goes, her childless co-worker Munn dryly complains that Parker's on the phone with her kids during lunch when she should be working, and rival Seth Meyers argues the stereotype that working moms have it tough is a double standard—after all, women don't have to continually get their shoes polished.

At least those steady doses of humiliation still pale in comparison to the agonies suffered by Uma Thurman in Motherhood where the former queen of cool plays a harried mom just five minutes from chucking herself into a wood chipper. Neither movie makes a convincing case for procreation. Parker, a mom herself, is assured at doing grody mom things like tasting her shirt to decipher the cause of a stain (just pancake batter, thank god). But her nights at home are as bad as her days at work. It's a guilt trip assault with the biggest mudslingers being husband Greg Kinnear, daughter Emma Rayne Lyle, mother-in-law Jane Curtin and a parade of perfect stay-at-home mothers who obsess over organic flour, dried fruit and the elliptical machine. Says best friend Christina Hendricks—the only sympathetic voice in the film—these "momsters" consider working mothers to be "ranked just below felons." Kinnear's husband and father is his standard nice guy shtick, leavened with an exasperation that's smartly underplayed. He's not a sitcom dad whining about wanting a meatloaf on the table; he's a reasonable guy genuinely frustrated by his wife's love affair with her Blackberry, and his gradual checking out of the relationship is more threatening than a screaming match.

Pierce Brosnan has had a late career uptick playing confident businessmen, the roles Alec Baldwin would still be playing if he hadn't gone comedy. Here, his stock wizard is a suave British widower who slowly warms to Parker's frenzy. He says he likes her chaos; she quietly loves his competence. And as a chill settles in at home: Parker and Brosnan's slow-heating romance-of-equals has us asking, "I don't know how she doesn't do it?" But there's no real erotic danger in a movie where everyone's so gosh-darned nice. Screenwriter Aline Brosh McKenna isn't bold enough to really rock the cradle—we know this has to end with hugs all around—but she does have one daring moment when Parker tries to talk a pregnant woman out of abortion only to panic about her babysitter and bolt out of the room halfway through her speech with an apology for being living birth control. The film, too, warns against pregnancy and makes having it all seem like a Sisyphean task—there will always be another peanut butter sandwich to make (that is, if your school allows nuts). Though the flick is formulaic and at times confounding (the ultra-femme Parker's big revelation is that "trying to be a man is a waste of a woman"), I don't doubt that the pressures will ring true for its target audience, which will leave thoroughly sated by a film that caters to their hatred of perfectionist mommy bloggers who equate McDonalds with shipping your kid to a coal mine.

Expect to see women sauntering from the theater to swoop up their kids from the sitter and treat them to a Happy Meal—and treat themselves to the luxury of not giving a guilty damn.