close
There's no map to manhood

Jeff Who Lives at Home 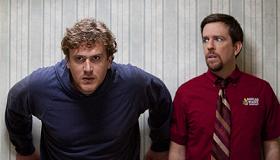 The Duplass Brothers scored big with their first mumblecore comedy in 2005 with The Puffy Chair, then scored bigger with their film Cyrus which featured a cast of indie veterans (Marisa Tomei, John C Reilly). But it's this comedy, Jeff Who Lives at Home that seems most actively positioned to bring their brand of gentle discomfort and understated tension to a broad audience once and for all. Jason Segel plays a pothead who believes in signs (and constantly quotes the movie Signs like some quote Deepak Chopra). He's unmoored and sensitive, smokes too much pot and lives in his mother's basement. But his brand of quiet searching is the sincerity that anchors this story of brothers at sea and a mother alone. A family drama that looks for answers in coincidence (is it really ever coincidence?), this endearing and breezy comic fable watches Jeff's coming of age and promises nothing after his moment of truth. Some might feel shortchanged by this but most will be too charmed to notice. Jeff is bound to attract attention, popularity, affection and box office dollars in spades.

Jeff is listening so hard for the cosmic order he can't get a job and has no idea how to motivate past the moment of obvious need—he's waiting to react and, at 30, this causes his family some alarm. Forget growing up, this guy's so stuck his most vital moment is tape-recording his thoughts while on the toilet. Thereafter he's at a loss for motivation. His mother (Susan Sarandon) baits him with little requests: it's her birthday and she just wants him to go fix a shutter in the kitchen. The view from his basement makes sunlight seem like a foreign entity. So when, during his wake and bake, he gets a threat that cutely re-enacts moments of Cheech and Chong ("Kevin...there's no Kevin here"), his mother calls him to fix the shutter and he's off on an odyssey built of intersecting lines. It's a bit like Crash but less nauseating and ironically featuring more vomit. (Correlation?)

After some early misfortune, Jeff stumbles upon his status-seeking brother, Pat (Ed Helms), who's just bought a Porsche Boxster because it was no money down and the dork wants what he wants. The brothers stumble across Pat's wife (Judy Greer) having lunch with another man. The entitled and put-upon Pat's marriage was in trouble well before he said "The Boxster's in the driveway" but it took her having lunch with another guy for him to notice. When the brothers lose the car they're stuck walking Baton Rouge and the film almost becomes a road movie in which the city is a distant character, a world the family is meant to appreciate but doesn't even realize surrounds them. Yet when they find their father's burial site (again, by accident) instead of a tender moment, they fight with all of the confusion of a Paul Greengrass hand-to-hand but none of the skill.

If you can overlook the Duplass' signature crash zooms and affectations of self-awareness, there's a lot to love here. The wayward man-child archetype they're still wrestling with is kept in an gauzy distance, a distance that mirrors the gap between Jeff and grown-up traits like confidence and motivation. The forces that could inspire him to manhood are here logically meaningless and confusing. Where is the cosmic order Jeff seeks? It's not in a job. Such is the struggle of a man seeking his destiny-a job's not enough, but what else is?