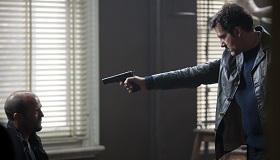 You would think an action film starring Jason Statham, Clive Owen and Robert De Niro would be a slamdunk—that they're so good at their jobs they can transform lame dialogue into convincing bromides or dominate scenes with a charisma weak direction can't drag down. Perhaps that's expecting the impossible. Despite moments of impressive action (all visible in the trailer) the majority of Killer Elite is so overwhelmed with needless exposition you feel like it wants you to take a jumbo crayon and make big, clear notes: "Must remember the Feather men are called so because they have a feather-light touch with the media." Oh, you don't actually need to take notes. The info is so on-the-nose you'd be hard-pressed to forget it. We all have to make jokes around the water cooler, and if enough people bother to see Killer Elite, its silly nonsense could make for a great comedy routine by Greg from IT. Based on a semi-autobiographical book I can only hope is better than the movie, Killer Elite has plenty of killing, but the only thing elite about it is the cast. Numbers may start strong, but will dwindle fast.

Jason Statham is a rogue agent whose honor is the axis of the story. A Sheik kidnaps his father figure/mentor (Robert De Niro) and puts him in a concrete cell guarded by his magnificently dressed son. The Sheik, like De Niro and Statham, wants to honor his fallen family. But unlike De Niro and Statham, the Sheik wants his family's presumed assassins hunted down and killed-with a parting gift of a few million dollars. This would be a rote assassins' gig if it weren't for the fact that their targets are from the SAS, a brand of assassin/spy paid by MI-5, 6 or 7 to take care of the particularly dirty-hush-hush-their pedigree exceeds even that of James Bond (if not their charisma). The SAS is the Killer Elite. Sort of. They're like British ninjas, if ninjas drank a lot of beer. Killing them won't be easy, but like I said, Statham's honorable and he's getting his mentor out of hock.

The one upside to Statham's high-maintenance killing spree is that the SAS has been disbanded for some time and the remaining agents have gone on to do other more or less viable things with themselves. Clive Owen, a man who was trained to be a god among spies but apparently can't manipulate his way into a nicer house, is the ground-level manager of the retired SAS members. His bosses are nameless men whose committee is laughably called "The Feather Men." The Feather Men manage the perception of their beloved SAS while Clive pushes the cream of the spy crop around like rent-a-cops at a mall. Naturally Statham's best bet in finding these fighting retirees is to follow Owen, but Owen is just as smart and principled as Statham.

When Owen takes a team of 12 SAS retirees to a parking lot, arms them and tells them loudly and in broad daylight that the man they're hunting down is good at combat, you should feel the earth turn beneath you. Twelve recruits against a single shooter? If the highest echelon of assassins are grouped en mass to kill one guy, isn't his threat level obviously past code red? Like most movies, this one is best when the dashing but dangerous actors stop talking. The fight scene between Owen and Statham is gorgeous—a heart-pounding feat of clever, if improbable, physics. (Lucky you, it's in the trailer.) After all that explaining, we're relieved to just grok at something awesome. But that's a bright spot in an otherwise dishwater grey movie. A romance is pasted onto Statham's character to add a touch of personal threat (because kidnapped "father" isn't enough?) and the final moments of possible comeuppance are about money. It's nice that Statham takes it all in stride, but for as over-clear as the film is, I'm not totally sure where its loyalties lie: The confederacy of spies? The book? With a delivery like a second grade textbook with cussing, this one's for the 7-year-old viewing public whose parents don't care what they watch on late night cable.