close
Swings for the fences—and succeeds 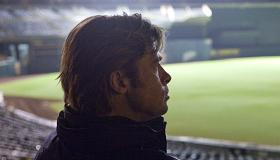 Based on Michael Lewis' 2003 book, Moneyball: The Art of Winning an Unfair Game, the surprisingly effective Moneyball has a smart script, solid direction and great performances. This true story of Oakland A's General Manager Billy Beane and his unorthodox winning formula is a career best for topliner Brad Pitt who plays Beane with the smooth assurance of Robert Redford or Paul Newman. Baseball movies are hit and miss, but this one is the shrewdest take on the game since Ron Shelton's Bull Durham and it has appeal that reaches beyond the ballpark. Well timed to hit theaters near the end of the season, this one should score at the box office.

For Moneyball, key members of the Social Network team including producers Scott Rudin and Michael De Luca and screenwriter Aaron Sorkin reunite to make another true life tale that pays attention to the details and behind-the-scenes maneuvering. The good news is not only does Moneyball succeed in taking us on a tour of the business side of baseball, it humanizes the shop talk to keep it from crashing into a sea of statistics. Thank writers Sorkin and original writer Steven Zaillian for keeping their eye on the ball in this story of a baseball-obsessed kid Billy Beane (Pitt) whose career takes him to the front office. He shocks the baseball world by ditching his the star players and hiring replacements in the most unorthodox ways imaginable. Credit for this his curious new protocol goes to a business-minded Yale grad named Pete (Jonah Hill) who devises a system that deprioritizes star power in favor of research, cold heart stats and cheaper players. The scenes where the very non-athletic Pete explains his methods to the grizzled veteran coaches are priceless and help give Moneyball its swing. But the film belongs to Beane and Bennett Miller's direction carefully weaves in the no-nonsense man's struggle to keep his career and personal life together despite a divorce and a job that doesn't let him spend much time with his daughter.

Pitt has never been better—he's shrewd and wonderfully engaging—and you can see why he stuck with this role through eight years of development hell including the dispatching of original director Steven Soderbergh just days before the film was due to shoot two years ago. It's a movie star role and Pitt, one of our last movie stars, fits it like a well-worn glove. Jonah Hill is his perfect counterpoint, deadpanning and underplaying at every turn. They make a great pair and Hill is well-positioned to move beyond comedy roles. In the role of the veteran (and conservative) manager, Philip Seymour Hoffman is perfectly cast as a man who clearly isn't looking for any change. Robin Wright appears briefly as Beane's ex-wife and Kerris Dorsey is a delight as his musically-inclined daughter. In flashbacks to Beane's early baseball career, Pitt is nicely played by twenty-something look-a-like Reed Thompson. For baseball fans Moneyball is nirvana. For everyone else, it's simply a smart, damned entertaining time at the movies.