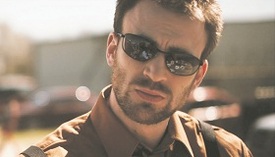 Imagine A Civil Action starring Ryan Gosling's inspiring teacher/drug-addict from Half Nelson and you'll get the basic idea behind Puncture, a typically improbable David & Goliath courtroom drama with a small lawyer battling the corporate medical establishment. Holding it together is an amusingly twitchy Chris Evans as Mike Weiss, a brilliant Houston attorney who finds exploitable legal loopholes and rehearses closing statements during serious crack binges with interchangeable cracked-out women in hotel rooms. His jabbering is amusing enough until Weiss develops a conscience and starts crusading on behalf of Jeffrey Dancort (Marshall Bell), inventor of a retractable, one-use-only syringe that could save thousands of lives for hospital workers and patients alike, eliminating the possibility of an infected needle piercing the skin for either. That this cheap and efficient invention is being shut out of American hospital systems by greedy corporations will come as a surprise to no one who's seen any movies about big business against the little guy; Puncture is rarely more convincing than the usual legal saga. Business will be limited to unfussy liberals and massive Captain America fans.

As Weiss, Evans is convincing as a fidgety hotshot who can show up to a meeting perfectly prepared save for the blood dripping from his post-coke binge nose. Weiss is clearly heading for trouble, but his insouciant recklessness is fun to watch and, for a while, it doesn't impede with his pursuit of a potentially-huge-but-problematic case. Partner Paul Danziger (co-writer/director Mark Kassen) is content with ambulance-chaser cases and reliable victories, but party-boy Weiss finds himself moved by Vicky (Vinessa Shaw), a nurse who accidentally pricked herself and is now dying of AIDS. The combination of Vicky's inherent decency (topped off with a risible deathbed speech played like a standard-issue disease-of-the-week TV movie) and visions of settlement dollars is enough to throw Weiss into a frenzy of activity. Despite the usual warnings from his partner that their firm can't afford to be this ambitious, Weiss becomes an earnest crusader even as he pursues his own total self-destruction.

Weiss' primary antagonist is Nathaniel Price (veteran TV actor Brett Cullen, totally credible), a slimy corporate attorney whose undisguised mercantilism and lack of interest in the ethical implications of his work are convincing. In the film's best moment, he tries to talk Weiss out of pursuing his case because it's logically unwinnable. So what if Weiss manages to shut Price down? "Guys like me are like cafeteria trays," he says. "Pick one up and there's another one right underneath." It's a succinct, convincing explanation of how openly mendacious corporations have the upper hand no matter what.

It's also the film's only remotely striking, original line. The opening drug-fueled energy subsides; earnestness, yelling about right and wrong and suspiciously timed lucky breaks become the order of the day. Weiss' stop-start drug use grows tiresome, the film loses flow, and ultimately any potential indictment of the health care, hospital and pharmaceutical industries is diluted by a last-minute nod (potential spoiler alert) to Silkwood, providing an in-name-only "ambiguous" ending that contributes nothing to any debate about how best to intervene in, reform or regulate American health care.