close
A State of Constant Sermonizing 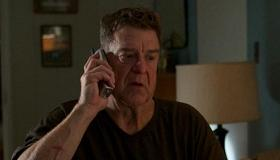 Ugly characterizations and simplistic preachiness negate the terror in Red State—a film that eventually proves horrific in ways unintended by writer/director Kevin Smith. For his self-financed and self-distributed (via select one-night-only screenings) follow-up to the lumbering action spoof Cop Out, Smith opens with a standard slasher film set-up that winds into a cautionary lecture about religious extremism. Three teenage boys are looking to have a foursome with an Internet sexpot and wind up prisoners of a crazy Christian fundamentalist cult. Once they're abducted, Red State drops any pretenses of suspense in favor of straightforward political sermonizing against conservative religious zealots. The cult here worships the word of Abin Cooper (Michael Parks), a thoroughly clichéd megalomaniac with a congregation of devoted relatives, a wild-eyed daughter named Sara (Melissa Leo) and faith that "God doesn't love you unless you fear Him." The end times are near (when aren't they?) and contemporary moral degradation can be blamed on homosexuals like the unnamed middle-American town's Sheriff (Stephen Root). The further it proceeds, the more blatantly Red State reveals it's a monotonous screed. Despite Smith's name-brand clout, this film's box office potential is likely confined to the filmmaker's rabid devotees.

Smith's desire to slam Christian extremists is clear from the early sight of Cooper's minions protesting the funeral of a gay kid. Also clear is Smith's initial, fatal mistake: he provides no likable counterpoint to his fanatical villains. Best friends Travis (Michael Angarano), Randy (Ronnie Connell) and Billy-Ray (Nicholas Braun) are an insufferably obnoxious horndog bunch, and their dim eagerness to have simultaneous sex with a stranger prevents them from being relatable, average teens; these guys are unctuous creeps without any other features. Smith assumes that this trio will earn sympathy simply by not being as awful as Cooper and his gang of lunatics, but the overriding effect is to nullify any interest in their plight. Unfortunately, as dull as Red State's heroes are, its baddies are an even more hackneyed bunch, with Cooper spewing formulaic bible-inspired hate while Sara and other assorted kooks—including a young pretty blonde girl, tough-looking rednecks and a woman knitting alongside a seemingly mentally challenged boy—smile and nod in blissful approval. Unreasonably convinced of his skill at writing natural dialogue, Smith stuffs copious oration into Cooper's mouth, but the triteness of the man's convictions is so pronounced that the proceedings quickly come to feel like ripped-from-the-headlines leftovers.

Ranting and raving while they stockpile weapons, Cooper's clan is a paper-thin variation on David Koresh's Branch Davidian outfit, and that similarity only grows once John Goodman's ATF agent and his armed companions try to confront Cooper and a distended shootout ensues. Bizarrely, this development results in even more exposition—Goodman relays plot information to his boss via Bluetooth ear piece—but no humor, which is particularly puzzling because Smith tackled theological issues with tongue-in-cheek goofiness in Dogma to sincere and truthy ends. Why not here?

Red State may be more technically competent than the helter-skelter Cop Out, but it's performances are wooden, and just as Smith can't wrestle an ounce of tension from his early horror passages, his later action-oriented segments are an unexciting mess. Moreover, his attempts to expand his condemnation to the federal government's post-9/11 response to terrorism—which, like Cooper's evil, is posited as the murderous byproduct of unchecked belief in a chosen cause—is ungainly, albeit not quite as clumsy as his treatment of his protagonists, who by film's end are cavalierly and callously reduced to disposable pawns in the director's thesis-paper of a movie.