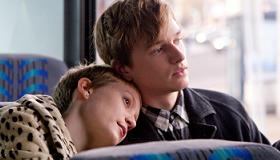 If Harold and Maude hadn't already gotten there 40 years ago, this quirky but engaging trifle might seem refreshingly original. The story of the brief but meaningful relationship of two outsiders—one who likes to attend the funerals of strangers and one coming ever so close to her own—has been brought to the screen in sweet, if not entirely memorable fashion by director Gus Van Sant. Premiering as the opening night of the Cannes Film Festival's Un Certain Regard section, this slight and likeable life and death love story will need all the help it can get to stay alive domestically. Van Sant's name will help, but word of mouth and critical support will be necessary to avoid an early death for the film itself, which Columbia Pictures handed off to its specialty division Sony Pictures Classics to nurture.

Enoch Brae (Henry Hopper) and Annabel Cotton (Mia Wasikowska) meet cute at a funeral. He likes to cruise the final celebration of complete strangers while she claims to work with gravely ill patients but is actually suffering from terminal cancer and is in her final months. Both are loners and unquestionably mavericks that live what life they have on their own terms; they come together out of necessity and perhaps, divine intervention. He has an imaginary friend he hangs with, the ghost of a Japanese Kamikaze pilot (Ryo Kase). She's into Darwin and all his theories of existence. His view of life has been colored by personal experience (both parents died in car crash) and he now lives with his sweet aunt Mabel (Jane Adams) who perhaps doesn't quite "get" him. Enoch and Annabel's mutual infatuation with death plays itself out in various ways as they act out death scenes including putting themselves in chalk outlines like traffic victims.

If you have seen any small character-driven movies like this you know the ill-fated couple will change each other for the better and make their precious days count more than an entire lifetime. What makes it all work here is Van Sant's canny casting. Wasikowska seems to truly understand the fatalistic aspects of Annabel, while Hopper (son of the late Dennis Hopper, to whom the film is dedicated) is not as deadpan or amusing as Bud Cort was in Harold and Maude, but he still finds a way to make his odd obsessions completely logical and understandable. Both have a natural screen presence and a chemistry that translates to audience empathy for the pair. We like these two, so we follow them wherever they want to take us. Kase's ghost of a warrior is a contrivance we could do without though, and Adams, a terrific actress, is just wallpaper here.

The relatively quick 91 minute running seems just right for the weight of the material and although Van Sant has done a good job with it (the script is by Jason Lew) it doesn't rank high in his impressive and unpredictable filmography.

Still Restless is a rewarding movie experience thanks to a pair of wonderful young actors taking us on their own unique journey.