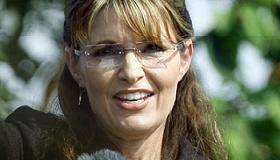 As divisive as his doc Kurt and Courtney, this made-for-British-TV doc by Nick Broomfield begins with the promise of neutrality—but it's a promise the film can't keep. As documentarians go, Broomfield thinks the villain of fair representation is exploitation—but he knows exploitation sells, so he chooses subjects who do the dirty work for him. Kurt & Courtney, Heidi Fleiss: Hollywood Madame, even the aspiring prostitutes of Chicken Ranch are guilty for their trashy, juicy misery. He's just there to report on it. Here, Broomfield and co-director Joan Churchill go to Wasilla, Alaska to meet Palin's supporters, but quickly they learn the town—and possibly the state—has plenty of people who want to tell him how much they hate her. From the sounds of it, Palin entered local politics with the pluck of Amy Poehler in Parks and Rec, only to immediately fire the veteran civil servants and replace them with cronies loyal to her cause. As they'd have it, the threatening Palin clan made a family hobby of launching fear campaigns, creating villains and forcing her constituency to join their hate brigade. One repeated phrase is, "She uses people and then throws them under the bus." The cult of personality she built sounds ingeniously Machiavellian, yet as one her of her bitter victims says, "She couldn't find Iraq on a map and that's where her son was going." The cognitive dissonance is off the charts. Ex-council members from local and state, where Palin governed from 1996-2002, all speak of her as immature and impetuous. One says she acted like "the most popular girl in junior high," another said she texted her way through meetings and treated them "like it was her fan club." She marshaled such a threat that the police were afraid to leave a car guard outside the house of a Palin "enemy" for fear they'd lose city property. And let us never forget: "We can see Russia from Alaska." What speaks loudest out of this bizarre post-mortem of Palin's grandstanding, coercion and stupidity is the obsessive way that celebrity trumps duty. After she was recruited as the Republican vice presidential candidate, she apparently had some plastic surgery and went shopping, but didn't bother to pick up an atlas. It's like Palin's starring in her own version of Gus Van Sant's To Die For, but without a successful murder plot or any particularly convincing sex appeal. But Broomfield ultimately undermines his cause. He shows an Alaskan blogger's cache of stock photos of Palin to demonstrate how closely her celebrity has been studied—the blogger says "I use this one to show her disapproving, this one if she's made a mistake..." Broomfield then uses the same photo filtering to identify Palin's feelings. It's quippy, but he's playing the game that he just said was disingenuous. Ultimately, the film plays to one party line—it's only as trustworthy as the subject, and just as loyal.