close
No bite in this Night 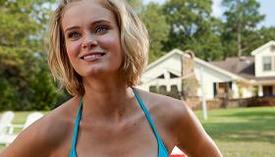 A thoroughly shabby attempt to piggyback on the success of last year's Piranha 3D, Shark Night 3D embraces convention with a voraciousness matched only by its predictability, amateurishness and all-around tameness. Even with its gimmicky titular special effect, David R. Ellis' latest is a direct-to-video-grade clunker that, like his Snakes on a Plane, desperately wants to have its B-movie fun while also slyly winking to the audience about its own silliness. The problem is that there's nothing crafty or subversive about his story, which focuses on a bunch of blandly attractive college kids who choose to spend a weekend out at Sara's (Sara Paxton) Louisiana bayou vacation home, only to discover that the saltwater lake in which they plan to frolic is mysteriously infested with all manner of toothy sharks. A PG-13 rating will ensure that teens can get a look at this umpteenth skimpily-clad teens-in-peril tale, but given that said classification also results in a dearth of the very T&A and gore that generally defines such pulpy efforts, box office prospects for this second-rate aquatic nightmare are thin.

Considering that Alexandre Aja's Piranha 3D both paid amusing homage to Jaws (the genre's granddaddy) and amplified its template's nudity and gruesomeness to its parodic extreme, Shark Night 3D's very existence is unnecessary, except as a means of providing a more restrained, TV-friendly version of Aja's work for younger moviegoers. Certainly, there's scant inspiration guiding this project, which is so beholden to clichés that one can tell the general order of its characters' demises by their nationality and the color of their skin. That's too bad for Hispanic hottie Maya (Alyssa Diaz) and "projected Top 10 pick" Malik (Sinqua Walls), though in the latter's case, a relatively early exit from the proceedings at least makes moot the question of why a star college athlete is such close friends with a motley crew of losers, including med school student and de facto hero Nick (Dustin Milligan), his "colorful" videogamer roommate Gordon (Joel David Moore), and body spray-loving nude model Blake (Chris Zylka). Accompanying these dolts are two women, Sara (Sara Paxton) and tattooed wild child Beth (Katharine McPhee), whose defining characteristics are their teeny bikinis, yet despite the film's nominally primary function as an erotic bloodbath, Ellis spends insufferable time dramatizing the dynamics between these one-dimensional airheads, thereby relegating the first half of his saga to vapid-blather set-up.

That early material also introduces a pair of local villains in Sara's scar-faced ex-boyfriend Dennis (Chris Carmack) and his stereotypical redneck lackey Red (Joshua Leonard), whose role in the subsequent mayhem is so insanely devoid of logic that Will Hayes and Jess Studenberg's script refuses to elaborate on it, ostensibly for fear of eliciting further derisive laughter. Once the sharks finally begin gnashing their teeth, Shark Night gets a chance to show off its standard 3D (a few exploding projectiles and some chewed-up body parts fly at the screen), as well as its C-grade CGI, which exhibits the same level of technical artistry and realism as the effects found in a typical Syfy channel original movie. However, even more than its general shoddiness—which extends to painfully wooden performances—what ultimately defines Ellis' wannabe-nasty romp are the lengths it goes to flirt with, but declines to truly indulge, the very disreputable elements that should be its bread and butter: talk of sex never features any profanity, carnage is largely kept off screen and/or drenched in murkiness, and humor is marked by cornball one-liners. Without sex, violence or comedy of either a thrilling or cleverly self-conscious sort, Shark Night drowns under the weight of its own punch-pulling wimpiness.