close
One to love 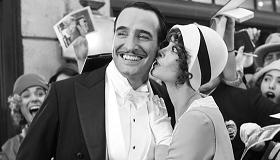 This new black and white silent set in 1927 took the 2011 Cannes Film Festival by storm. A traditional Star Is Born-story, The Artist is about an actor who watches his girlfriend's career ascend as his is derailed by the arrival of talking pictures. Although a seemingly risky bet for box office success outside of small arthouse niches, the film's charm and delight of discovery, plus its sterling international performances, could make it a breakout hit in theaters, just as it was in Cannes. Warner Bros handles France but the savvy Weinstein Company has picked it up for a late fall release in the U.S. just in time for awards season where it should score nicely.

Director Michel Hazanavicius, whose two James Bond OSS spoofs managed to be successful specialty releases, has masterfully captured the tone and spirit of the great silent era without entering into Mel Brooks style send-ups (a la Silent Movie). He clearly has a love for films of the era and has created something new for 2011 that's every bit as viable as those from ‘back in the day.' The Artist is also a compelling movie-within-a-movie about a silent star caught up in major change. Change, and the way we adapt to it, is indeed a major theme of The Artist, as is the need to look to the future, not the past.

George Valentin (Jean Dujardin) is a huge silent movie star, a swashbuckling Douglas Fairbanks-type who always appears with his faithful Jack Russell Terrier, Jack (Uggy, in a scene stealing performance). Though he's married, he falls for the sweet Peppy Miller (Bérénice Bejo), whom he meets at the premiere of one of his films. With paparazzi snapping away, she soon lands a role in one of his movies. Not long after, studio boss Al Zimmer (John Goodman) clues Valentin in on the new all-talking format the industry plans to adopt. Valentin rejects the thought of sound pictures and sets off on an elaborate silent project that ends disastrously. With the converging stock market crash of 1929 and the advent of talkies, his career is over just as Peppy's is taking off. She becomes a major star while he hits the ropes, comforted only by his faithful companion Jack. Can he make a comeback? Will true love prevail?

Superbly shot in the original 1:33 aspect ratio of the era by Guillaume Schiffman and gorgeously scored to within an inch of its life by Ludovic Bource, the production detail is aces throughout. The performers are certainly up to the task to with Cannes Best Actor winner Dujardin earning his accolades. Jumping into silent mode, Dujardin proves he can do anything from comedy to adventure to dancing with ease. Silent emoting is the essence of great screen acting and he fits the bill perfectly, just as he did in Hazanavicius' Bond spoofs. Like Roberto Begnini before him, Dujardine richly deserves a Best Actor Oscar nomination for his work here. It's that good. Bejo matches him with charm and style. The Americans in the cast—including James Cromwell as his loyal chauffeur and Penelope Anne Miller as his wife—also acquit themselves nicely. Arguably the real star here is Uggy, beating the dog in Marley & Me by a mile.

The Artist is a film for people who love movies and a movie you are absolutely going to love.