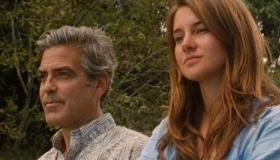 After a five-year absence from the big screen, writer/director Alexander Payne (Sideways, Election, About Schmidt) returns in top form with this extraordinary dramedy about a family coping after a tragic boating accident leaves the mother in a coma. George Clooney has never been better, here playing the father of two girls who must navigate this difficult new territory. The story should resonate strongly with adults and even younger audiences who will find much to digest. Thanksgiving opening will draw strong numbers boosted by top reviews and Clooney's star power. Film could break out into a sizable Terms of Endearment-style hit. Awards prospects are through the roof.

Set in a workaday Hawaii Hollywood movies rarely show, The Descendants puts a spotlight on life in paradise with Clooney playing Oahu resident Matt King, an okay husband and father who's never really had to deliver much in those roles. As the trustee and major property owner in his family's large, untouched land holdings, he is under pressure to sell. Meanwhile his wife Elizabeth (Patricia Hastie) is in a coma after a boating accident; she'd previously asked him to pull the plug if her prospects were hopeless. Payne doesn't hide from this situation, presenting the comatose woman as a significant onscreen character. The main action revolves around his relationship with his ever-challenging daughters, including teenager Alexandra (Shailene Woodley) and her feisty younger sister Scottie (Amara Miller). Alexandra, in fact, displays all the growing pains and irresponsibility of a teen girl but, through the course of the picture's nearly two-hour running time, emerges with a new maturity allowing the impressive Woodley (a real find) to present a three-dimensional teen of the sort rare in film. Her dimwit boyfriend Sid (Nick Krause) comes off as an uninhibited dunderhead, but is surprisingly allowed to exhibit a smarter side as the film progresses. A major plot thread about the wife's newly discovered infidelity is masterfully woven in and out.

These characters are all recognizably human; it's a welcome trait that Payne always presents in his films and one sadly missing from most contemporary movies. Adapting Kaui Hart Hemmings novel, Payne and his co-writers Nat Faxon and Jim Rash have provided some terrific dialogue and natural situations to let these flawed characters breathe, each earning audience empathy rather than asking for it. Payne, like Billy Wilder before him, has the remarkable ability to move from comedy to drama and back again on a dime, sometimes during a single line of dialogue.

The cast couldn't be better. Clooney is not afraid to show flaws onscreen and his Matt King is not only flawed, he's floundering. The actor doesn't miss a beat, demonstrating his character's issues but still managing to make him oddly likeable. Woodley is a true standout along with the wonderful Judy Greer as Lillard's betrayed but vindictive wife. Beau Bridges is great as a cousin urging Matt to sell the family land and Robert Forster socks home a couple of great and deeply touching scenes as Elizabeth's father.

Production values are first rate and Payne's incorporation of some well-chosen Hawaiian music is a real plus. The Descendants is that rare bird: moving, enlightening, funny and unapologetically human. It's one of the year's best pictures, one to savor and think about.