close
Half the fun 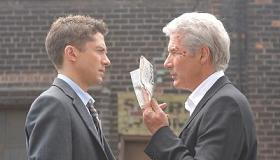 Too silly to be confusing and too flaccid to reach potboiler status, the convoluted spy-thriller The Double is a tossed-off theatrical release that lands with a resounding thud. Michael Brandt's film casts Richard Gere as a somewhat suave and remotely retired CIA agent whose final prey, a ruthless Russian assassin, code-name Cassius, eluded him. Topher Grace is the bright-eyed and completely clueless FBI agent who idolizes both Gere and said assassin. When a U.S. senator is murdered, the act is complete with all the hallmarks of a "Cassius" crime, and both agents get sucked into a search for the no-longer-dormant killer. The Double doesn't even try to hide its touted twists, and the entire production is so phoned in (and just plain phony), that it could only draw a small audience dedicated to double-crossing spy thrillers, even third-tier ones.

The Double reveals its big twist early on, setting it as the central conceit of the entire affair, which in turn creates two huge problems. One, it removes any classic whodunit tension, begging for that tension to be replaced instead with equal parts action and intelligence. Two, it nearly guarantees that a second twist will get tossed in later, just to keep that same audience on its toes. The Double doesn't have much in the way of action, little that rings as intelligence, and that second twist is so clunky and unbelievable that it's likely to leave audiences reeling with laughter, not surprise.

Halfway through the film, the grizzled Paul admonishes the plucky Ben for not asking why the assassin, nicknamed Cassius for his politically motivated killings, ever felt compelled to kill. Ben has made his bread and butter on studying Cassius and crafted a Harvard thesis on the killer that attracted the attention of the FBI, Paul and maybe even Cassius himself. While he believes he truly "knows" Cassius, Ben's never asked why—and the film doesn't either.

It's a decidedly unsexy spy thriller; taking place in suburban homes, sanitized boardrooms and musty offices. There's not much in the way of action, though the few hand-to-hand fights the film pulls together are somewhat interesting, if a tad scattered. We're treated to precious few of Cassius' kills, which is a shame because one of his assassinations, shown in flashback, is likely the highlight of the entire film.

Performances are not consistently strong. A reasonably talented supporting cast is squandered: Odette Annable (previously Odette Yustman) is lovely as Grace's wife but Stephen Moyer barely registers in two scenes, and Martin Sheen appears to be trotted out just for gravitas. The bulk of the film is dedicated to exchanges between Paul and Ben, giving Gere and Grace a chance to hit on some unexpectedly nice chemistry. Grace has an inherently likable face and manner, and here, his Ben Geary is so out of his element that it's hard not to feel attached to the kid. Gere's Paul careens between mopey and manic with little warning. It's not exactly an organic performance, but there are moments when it's strangely compelling.

That sort of dumb-bunny scripting comes courtesy of Michael Brandt and Derek Haas. The pair has also penned stuff like 2 Fast 2 Furious and Wanted, which doesn't quite explain why this script is so void of action. Yet, the film is also Brandt's directorial debut, so one wonders if it's set in a lower gear to help the new director get his bearings when it comes to pulling double duty. If that's the case, the boys shouldn't be afraid to pump it up; they're capable of writing bang-for-your-buck actioners, but The Double is not one of them, not even by half.