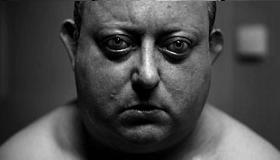 Nasty and over the top, The Human Centipede II (Full Sequence) feels like a horror movie that hates horror fans. An embodiment of the sentiment, "May you get what you want, and pay for it," writer-director Tom Six rewards fans of The Human Centipede (First Sequence) by following through on every repulsive idea hinted at in the original with graphic and hostile glee. But Six fails here (as he did in the first) to create a universe that is as logical as it is deranged, which means that (Full Sequence) won't earn the series any new fans but may satisfy some existing ones.

Pulling a Blair Witch 2, (Full Sequence) begins with a superfan parking attendant finishing his umpteenth viewing of the original film. Martin (Laurence R. Harvey) lives in a world like ours but his is swelling with empty and disturbing spectacle. Fetishizing the twisted body mutilation seen in Human Centipede (First Sequence), Martin promptly clobbers and stuffs a couple teens and some other drivers into his van: he hopes to get crafty with his own Human Centipede. Next step: sewing kit. As his already hostile relationship with his mother (and flatmate) further deteriorates, Martin grows increasingly bold with his plans, and he reaches out to the stars of the original film, luring Ashlynn Yennie to his London warehouse for what she thinks is an audition for a Tarantino movie. With all of Dr. Heiter's insanity and none of his mad doctor skills, Martin begins constructing his own centipede, unleashing an explosive wave of gore and brutality that even he may not survive.

The original Human Centipede was hard to love; this one is easy to hate. It's ok. It hates you right back. I don't remember ever seeing a horror that examined the filmmaking/audience relationship in such an accusatory way. While the premise of the first film was a sort of naked provocation, this one feels like deliberate antagonism: it aims to punish its audience for paying to see the nasty in Six's head. On an abstract level that's sort of brilliant, because Six not only depicts the ideas from the first in exhaustive, realistic detail, but he adds several vile flourishes to amp up the repulsiveness.

While folks like Ti West are fighting the good fight for suspense and minimalism, desensitized fans rely on the extreme content the Centipedes provide to have any reaction at all. On one level, Six is a shrewd commentator on this phenomenon because his original film succeeded purely on the singular experience it promised. But as people feel the need to see the sequel—not "want" to see it, but "must" see it—a filmmaker basically saying "here's what you get, asshole" is far more compelling in concept than execution.

In a larger sense, however, it's Six's execution and not his conceptualization that keeps it from being a truly affecting film. First and foremost, his sense of plotting is mediocre at best. He has a gift for coming up with memorable moments, but they lack connective tissue to the larger, driving narrative and the reveals don't do them justice. He confuses lackadaisical pacing and repetition with suspense: while there's something funny about a killer who has to pause to use his rescue inhaler, the gag lengthens scenes and fails to enhance their intensity—especially once he establishes the only thing stopping Martin is his own hubris (and/or Six's screenwriting).

The bigger issue, and the one that keeps Six from being a truly important filmmaker, is his inability to fully render a world that makes sense, even on its own terms. For example, Martin works in a high-traffic parking lot used daily by many normal people, so it stands to reason that someone would notice if their friends or loved ones went missing. He executes his plan so clumsily that the garage is extensively stained with blood, but no one ever seems to notice. And then there's the matter of duration: Martin's victims are tied up in the "surgical" warehouse without food and attends to their injuries (such as gunshot wounds or crowbar-induced concussions) with duct tape—if at all.

I'm not asking these questions to challenge the authenticity or logic of the film. But if Full Sequence is attempting to be the "real" version of the first film, it fails to create a palpable sense of realism. And if it's comprised of pure dream (or nightmare) logic, it never clues the audience in, even with a finale that suggests multiple possible outcomes. The cruelty that Six inflicts on the viewer never has a clear or consistent purpose; sometimes it's a metaphorical fulfillment of would-be audience demand, other times it's just mean-spirited sleaze. Without a guiding principle the violence either becomes a gorefest disguised as a great idea, or great idea overwhelmed by gore.

Ultimately, however, "liking" and "not liking" this film is more or less immaterial. (The only reaction that concerned me after the screening was when another viewer said in earnest, "I wanted more.") This, after all, is a sequel to a movie where people were sewn ass-to-mouth. Enjoyment seems less important than "survival." But the experiential aspect never quite fulfills expectations, because as a whole the film is merely tedious and unpleasant, where it could have been provocative or disturbing in a profound way. In which case, let this critique be neither an endorsement nor condemnation, because "worst/ grossest/ most depraved" pejoratives only play into the marketing team's hands. Glorifying its artistic ambitions, however half-realized, plays into the filmmakers'. So consider yourself forewarned, because The Human Centipede (Full Sequence) is everything you expect it will be. But make no mistake: if you willfully choose to patronize this sort of movie, much less this one in particular, you deserve what you get. At least, that's what Tom Six seems to think.