close
Clooney has to try harder for my vote

The Ides of March 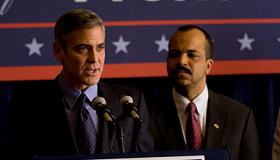 A stellar cast buoys this otherwise workmanlike political drama based on a the play Farragut North. Structured like a chess game, The Ides of March watches the strategists of a presidential campaign struggle with the wrongdoings of their mostly ideal democratic candidate. Damage control is a tricky game made of power checks, whispered threats and backroom deals. Surprisingly, George Clooney's direction is somewhat underwhelming with crucial conversations oddly lacking in tension. The stars' sex appeal is 100 percent (ever heard of a politician who kept it in his pants?), and Clooney trusts in them to add sparks that he can't quite ignite. Even if Ides doesn't sizzle from start to finish, box office success is a sure thing.

Young and hot, Stephen Myers (Ryan Gosling) is the strategic mastermind behind the presidential campaign of democratic hopeful Mike Morris (George Clooney), a candidate who's Clintonesque in charisma and sexual appetite. He's 30 and the ideologue half of the candidate's "brain trust." The other half of the strategic team, Paul Zara (Phillip Seymour Hoffman), is the one willing to look away from moral infringements, so long as his man wins the seat in office. The other democratic candidate, their target for today, is far from ideal but his campaign manager (Paul Giamatti) is hungry for new blood and wants to poach Stephen, which sets up a series of skirmishes, firings and disillusionments. But the game's not over until checkmate and the rook and the bishop still have a lot of fighting to do before corner the King.

The demanding pace of Ides is part of the film's power. Energy is high and the information is dense. The amount of political detail you have to absorb in the earlier part of the film may make you wish you read more than the comics in the morning paper, but the film soon shifts gears into a far more familiar morality tale. Clooney is a terribly credible political candidate-in a Hollywood sense. From the film's first scene-in which Gosling tests the podium for an upcoming speech—politics is performance. Clooney's not invested in the division between private life and public persona. He's interested in the soul you lose when you play a part—a resonant story for an actor. Also in play is the idea of action as message. Why take that role, ally with that manager? The public eye is the public eye no matter what part you play.

To Ides, common sense is still an electable quality (I wish) and the President is the god of national integrity. It's a great image of America, even when it fails some. Democrats will like the first half and Republicans will like the second. But only critics may love Clooney's prestige-y, technically competent, well cast drama-and Oscar voters might agree. It's prestige-y, technically competent and lousy with the sex appeal of a phenomenal cast. Medicore as it is, it's at least a conversation piece that's polite enough not to come out on an election year.