close
Karma's at the door—and it's got a gun 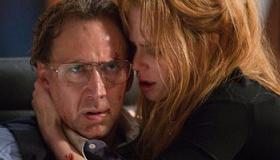 Nicolas Cage is a reprehensible diamond salesman who evades taxes and neglects his wife (Nicole Kidman) in this home invasion thriller by Joel Schumacher (Batman Forever, Number 23). The Millers live in a custom-built mansion, a beautiful but chilly monument to the values we project on them: if you're not biased against their wealth, you trust that their security system was installed to protect their daughter Avery (Liana Liberato), but if you judge their conspicuous consumption, those cameras are really protecting the cash in the safe. Cage and Kidman play restrained and unhappy bedfellows, but the criminals' eventual penetration into their home is a hot mess of double talking, double crossing and cross purposes. It's never boring but the relentless twists do get a bit tedious. Trespass gets a little too campy, offers nothing in the way of subtext and ultimately leaves you a little unfulfilled<span style="line-height: 15px; font-family: arial,sans-serif; font-size: x-small;">&mdash;</span>but frankly, it's fun that delivers on the promises of its premise. Bright but not brilliant, revenues won't match the cost of the massive house that's the real star of the show.

Kyle is a fast-talking salesman as flashy as his goods, but he knows his business and he's earned his mansion. Sarah (Kidman) is a sad housewife. The marriage has gone cold and their daughter has noticed. When fake security guards enter the house, their basic intention is the scare the parents and scour the safe. But the team is way too big and the daughter, a bargaining chip in their plan, has snuck out of the house to go to a forbidden party. It's a blessing...for a while. The leader of the gang screams at the couple to "gain trust," only Kyle isn't having it. He's got a high pressure job and he's good with adrenaline (but a wuss when blood is shed) so when the leader tells him to open the vault at gunpoint, Kyle's mad negotiation skills go into overdrive and those cameras of his are focused on his Carrera safe. Sarah begs him to give in, but no one can play that epic fast talker like Cage. One moment of particular hysteria ends with a totally cogent rant about diamond certification (apparently they're more exactly registered than newborns) and during the rant's fever pitch, Cage swings right into a Bad Lieutenant: Port of Call, New Orleans blitzkrieg. All Cage needs to seal the deal is an exotic pet. Maybe an iguana.

What makes this intriguing is how capable the captives are<span style="line-height: 15px; font-family: arial,sans-serif; font-size: x-small;">&mdash;</span>this is a hostage drama where both sides are beholden to a power hierarchy and the politics on the criminals' side goes in every direction too, from sad to psychotic to straight faced lies. The flip-flopping is more fun than it is suspenseful and audiences are likely to laugh at Cage and the constant over-the-top-ness of the plot twists. Everyone is perpetrating a ruse at one point or another (the best of which is Sarah's<span style="line-height: 15px; font-family: arial,sans-serif; font-size: x-small;">&mdash;</span>she's ferocious) but there are so many mindgames it's impossible to know whose benefit they're for. Like a typical Schumacher film, the playacting is done for its own sake<span style="line-height: 15px; font-family: arial,sans-serif; font-size: x-small;">&mdash;</span>there's little substance beneath the surface, but that surface has "fire and ice" bling.