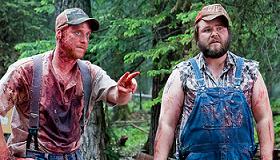 Tyler Labine and Alan Tudyk steal the show in this send up of the cabin-in-the-woods horror subgenre. The crux of the joke is class, but it's far from highfalutin. Good Ol' Boys Dale (Labine) and Tucker (Tudyk) have finally earned enough to buy a summer home. Though the cabin is on doomed ground and was clearly once owned by a serial killer, Tucker and Dale see hanging bones and "remaining victim" newspaper clippings and say "musta been an exca...anthr...palean" — all too eager to see the upside and admit they knows less than the next guy. When a carful of wealthy coeds goes camping, their lack of beer inspires bloodcurdling cries. At a pit-stop they meet Tucker and Dale, who scare them mightily just on the grounds they're hillbillies who don't smile enough. (These kids are so sheltered they've only seen farm equipment used to knock off snotty fratboys.) A lakeside accident brings the hillbillies and the coeds together again. When the sanest among them, Alison (Katrina Bowden), falls into the water, the hillbillies fish her out, effectively depriving the kids of their voice of reason. Terrified of the hillbillies, the kids keep mortally wounding themselves (in the proper, horror movie order), bringing Tucker to figure that the college kids have a suicide pact. Fumbling with the safety on a gun, one kid offs himself as Tucker yells, "could you just be more careful?!" These two groups are from different movies and the rift is consistently fun. When the yuppie kids try to burn down the hillbillies' summer home the class conflict seems the most pointed. Of the genre elements, the only thing that seems absent is a hormonal attention to morality and sex — which might make this a great, detoxifying double bill with Lars von Trier's AntiChrist. I'd swear they were shot at the same cabin.