close
Not so lucky numbers 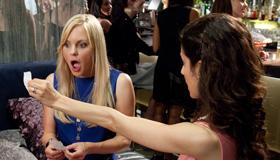 What's Your Number? features Anna Faris as Ally Darling, a Bostonian who's sent into a tizzy by a magazine article explaining that women who've had more than 20 lovers will probably never find a husband. A friend notes that it's true: too many sexual partners leave a woman with "No self-respect, no husband, no muscle tone in your pelvic floor." That sums up the film's mix of raunchiness, realism and romance—and demonstrates how a supposedly 'female-driven' comedy can still equate finding happiness and finding a husband. Some audience members will come out for What's Your Number? for Faris' appeal and likability, but they'll leave disappointed because this film is more interested in showing her physical assets than her comedic ones, and word of mouth will probably be kept to a dull murmur despite Fox's marketing muscle.

In an April 2011 New Yorker story, Tad Friend used Anna Faris' career as the starting point to look at the bigger, thornier question of how female comic actors can succeed in the post-Apatow age. Raunch and rawness have seemingly become the keys to comedic success, yet the audience will judge, and judge harshly, a female comic actor for dialogue, jokes and conduct that, if issued by a male comic actor, would be rewarded with peals of laughter and cash at the box office. Friend's piece specifically used Faris—and What's My Number?—to examine double-standards, trends in comedy, the objectification that still hurts even talented actresses and the challenges facing good comediennes to package films that a no-talent man like Nick Swardson could get greenlit with little more than a text to Adam Sandler. It was a fascinating piece; indeed, far more fascinating than the film it talked about.

Recently unemployed, facing the lavish wedding of her little sister Daisy (a charming yet wasted Ari Graynor) and tired of dating jerks, Ally decides to go back to her list of 20 lovers and see who's single and who, if anyone, has gotten better with age: "I may not have control over much, but I do have control over my pelvic floor." Helping her out is the womanizing, under-employed musician from across the way, Colin (Chris Evans, whose abs are better-defined than his character).

If you have never seen a movie before, you will no doubt be surprised by the turn of events that follows. If you have seen a film before, even one, you have seen a better film than What's Your Number? Part of that is the curdled, rancid and retrograde tone, that first implies a person who's had many safe and consensual partners is some kind of trollop, when really, if Ally is 34 (like Faris) then her scandalously high number of lovers means she's been with 1.25 lovers a year since college, which hardly seems ludicrous in the post-pill age. Second, this suggests the only way a woman can truly find validation in the 21st century is through a husband.

But outmoded sexual politics and mores aside, the other damming case against What's Your Number? is that it's not very funny. No one in it talks like a person; plot threads (ranging from Ally's potential future as an artist to the fact that one of her 20 is a woman) are left to dangle unexplored and unexplained; the pace feels sluggish and trapped in amber; every line is delivered like the performers are waiting for the laugh track to kick in. (Unsurprising, considering director Mark Mylod's experience is from television—glossy television like Entourage and United States of Tara, but still.) When Ally and Colin have their big confrontation, Colin actually yells out "Ally, you don't know what you want!" with the sort of fervor that would make a Days of Our Lives veteran proud. This is Faris' vehicle, though, and she aims it towards the ditch more often than not. Ally's efforts come at a time when she's unemployed yet somehow affording her huge apartment, and Ally's behavior is more phony than not. The idea that Ally once faked an English accent for an entire relationship (with the wasted Martin Freeman) is ludicrous and embarrassing, but that silliness isn't supported with anything especially true, real or honest.

The worst thing about What's Your Number? is the way the occasional shaft of light breaking through the cracks of its airless shell reaffirms how dead it is inside. Ally's ex-lovers include Chris Pratt, Thomas Lennon, Joel McHale and Freeman, who are all fun to watch (plus Andy Samberg, who is not). Ed Begley Jr. makes hay as Ally's tweeting, oblivious dad. And there's a great vocal cameo as well. But the film itself sums up why all the hue and cry of the plot is meaningless when Evans asks, "What kind of guy cares about how many guys you've slept with, anyway?" It is possible to make a film that combines the risqué and the real, the funny and the feminine; look to Bridesmaids—and more importantly, Bridesmaids' box office—for evidence. Considering the film's obsession with counting and accounting, it's fairly ironic how What's Your Number? winds up being a stale comedy whose obsession with pre-feminist thinking makes it mean less than zero.