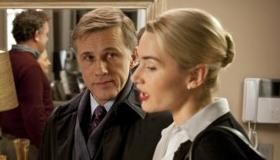 Roman Polanski's third filmed play and his fourth film featuring the prolonged psychic disintegration of people trapped in apartments, features the second-best vomiting scene of his career (after Bitter Moon); that's to say that Carnage has many familiar Polanski elements running through it, exhibited with a career's worth of pared-down precision. Carnage is very much a filmed play (co-adapted by the director from God of Carnage with co-writer Yasmina Reza) whose interests happily coincide with the director's track record, allowing two couples—broker Nancy Cowan (Kate Winslet) and lawyer husband Alan (Christoph Waltz), salesman Michael Longstreet (John C. Reilly) and writer wife Penelope (Jodie Foster)—to berate each other at length for the viewer's amusement. Relatively light-hearted for a Polanski film (no one dies), Carnage is fun verbal warfare cleanly filmed. While not a major work, the combination of Polanski's name and the top-notch cast may draw a small audience.

The Cowans' son Zachary (Elvis Polanski, the director's child) hits young Ethan Longstreet with a stick, knocking out two of his teeth. Rather than litigate, the Longstreets invite the Cowans over to draft a mutually satisfactory letter summing up the legal situation. Afterwards, the Cowans prepare to leave, but offers of cobbler and coffee snare them for longer than expected, and every exit attempt afterwards ends when the argument grows too heated to abandon.

At first the verbal parrying is conducted with the pretense of civility and something besides personal egos at stake. Amid the many contentious topics raised, the biggest is the gap between naive liberalism and a cynical, experience-based pragmatism that borders on the nihilistic: touchy-feely Penelope insists not just on an apology from Zachary but genuine, unfaked emotional growth ("How is he experiencing this?," she asks). Her naïveté draws barely suppressed disgust from venal Alan. Michael attempts to play the part of bluff, hearty conciliator, but as the arguments grow more savage he gives up, pulls out the whiskey and invites everyone to settle in and get drunk.

When not repeatedly returning to their kids' brawl, the couples bicker amongst themselves, attack each other for shaky or hypocritical ethics and temporarily realign themselves along gender lines, with the cynical, child-hating men mocking their overly sensitive wives, who in turn unleash deep-buried contempt for their self-justifying spouses. Though one might expect all four participants in the fight to be revealed as equally flawed in different ways, Alan gets all the best lines and stands out as the unmistakably accented foreigner in the room, and the only one with the guts to openly proclaim his lack of un-American optimism. A key plot point is Michael's cruel release of his child's pet hamster onto a busy Brooklyn street and not picking it back up once he realizes the animal is terrified; the final shot (revealing the hamster's fate) allies Polanski with Alan's unapologetic survivalism at the expense of others.

Polanski turns the single-set action—necessary for a play, harder to explain away on film—into a joke, with stage directions trapping characters in a different medium. Slathered in harsh daylight, the camera stays bolted down until the alcohol enters everyone's bloodstream, at which point Polanski's familiarly unnerving handheld shots emerge. Carnage's dialogue can be glib rather than lacerating and the opening minutes are somewhat unconvincing, but once civility is completely abandoned the film really takes off. At 79 minutes, there's no chance to do anything but enjoy another meticulously shot, unostentatiously tense Polanski film.