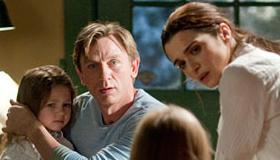 It's possible the only good experience to come out of Dream House, a psychological horror less fun than dental school, is the real life relationship between its stars Rachel Weisz and Daniel Craig. Craig plays a publisher who's finally moved into the small town house of his dreams, and his pretty wife (Weisz) and darling daughters make everything in said house feel alive. If you've watched the trailers, you know the rest and have a better view of the plot than the film could possibly provide. Jim Sheridan, the man responsible for My Left Foot, directed this sugary Shutter Island knock off presumably guided by the mantra "one thing at a time." Sadly, that one thing is always obvious, never intriguing and about as interesting as the carpet patterns on my mechanic's floor. Not screened for press to avoid the spread of bad publicity, this one will unquestionably die by word of mouth. No mortgages will be paid off with this picture's grosses.

It's possible that Daniel Craig left his high-powered job as a publisher to spend more time with his family. He may be writing a book at home during a particularly scenic winter. His wife may be tackling home renovations like a pro and his daughters may have found the clubhouse of the kids who once lived there—the specters of a slaying no one warned them about before they closed escrow. Also, there may or may not be a man lurking outside and Naomi Watts (way too sexy as the next door neighbor) may or may not be hot for Craig. Somewhere in the middle of all that loosely attended fiction is a subplot glimpsed through security cameras—a subplot wherein Craig survives institutionalization, changes his name, throws furniture and meets many inmates more gentle than he. With no clear memory or understanding of why he was committed, he could only discover the painful truth that was laid out so excruciatingly in the trailer. Do we have any question what happened? Generally speaking: no. The real problem is, when the film blindsides us with a mystery we didn't know existed, we're already too busy not caring about mystery we knew was there.

When the film fleeting becomes an action movie, Sheridan's direction momentarily suggests that we've been following the wrong man—maybe Craig's not the real protagonist, maybe this is someone else's story and that's why we're only getting oblique and meaningless insights into a life that we should be more trenchant and rewarding to follow. Could Dream House be better if we were following a different crazy man? Anything would help.

The real mystery here is how this mess of a movie got such a stellar cast. Performances are solid because we're talking about powerhouse actors. Technical merits are also top notch and in a film with so little to care about you have time and energy to really notice such successes. But Dream House, which takes a few slight moments to imply some experimental intrigue in the first act, begins with a broken Craig and doesn't reveal his instabilities until halfway through. Maybe he was of unsound mind before the tragedy. Or maybe he's just a jerk with great abs.

When you enter a film you know will be a psychological riddle, you're likely to consume all details like they're clues to a mystery you're waiting to solve. Like the tattoo that disappears and reappears at random as Craig carries his kids or flexes his biceps in the bath: watch closely and it might mean nothing at all. For Dream House, clues are so inconsequential and mystery so meaningless that the game has the on-the-nose value of its title: is the house in his dreams? Yeah. And?