close
Pulled me off of my knees 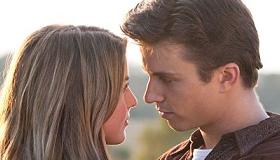 For what it's worth, Craig Brewer's Footloose is the best 1980s movie made in 2011. From start to finish, Brewer's remake exudes the look and style of its forebearers: semi-awkward dance choreography, clunky dialogue and an obedience to formula that borders on cliché. But somehow, it works. Updated for the Step Up crowd and shellacked with a country sensibility to cover all available teen demographics, Footloose should play well over its opening weekend, but it remains to be seen whether fans of the 1984 original will rally around the new version, or rail against it.

Kenny Wormald (Center Stage II: Turn It Up) plays Renn McCormack, a Boston teenager who relocates to the fictional town of Bomont, Tennessee after his mother dies of leukemia. Although he's committed to his school work and helping out his uncle Wes (Ray McKinnon), he quickly runs afoul of the law when he discovers that there are rules against loud music, dancing, and most other social opportunities regularly enjoyed by teenagers. Determined to return dancing to Bomont, the rabble-rousing Renn attracts the consternation of Reverend Moore (Dennis Quaid) and attracts the passions of the Rev's daughter Ariel (Julianne Hough). Branded a troublemaker by the authorities, Renn finds himself estranged from the adult community and is forced to decide how far he wants to take his crusade—and at what cost.

Except for slapstick comedies, it's probably inappropriate to laugh at the unexpected deaths of a character, especially if it's meant to be a galvanizing moment of drama. But during Footloose, the incredulous reaction viewers had to the deaths of four teenagers is a testament to the uphill battle director Craig Brewer inevitably faced in remaking a beloved (if cheesy) classic. His remake comes when Hollywood has shunned semi-serious teen films like the John Hughes canon for sex farces and dance battles. But Brewer's dance-oriented film is not meant to be merely fun or frivolous, which is why viewers will greet it with surprise—and yes, derision—for veering away from the formula of upbeat crowd-pleasers like the Step Up films.

That choice to play it honest, even solemn, doesn't make Footloose either good or bad. It's just different than the films it will jockey for dollars alongside—and audiences today seem eager for mindless cheer. But it's the film's fealty to the 1980s aesthetic of the original that is both its downfall and its saving grace. It embraces all of the unexpectedly serious twists and turns of the '84 Footloose, as well the less effective melodrama and even some of the dance choreography. Rest assured, longtime fans: there is a punch-dancing scene in an abandoned factory that ends in the main character wearing a dirty, skintight wifebeater. And even though you can see more complicated dance routines on Dancing With the Stars, there's something charmingly quaint about choreography that resembles something a teen would come up with on their own.

And there are quite a few things that this Footloose does at least as well as its predecessor. Renn is a smart, well-rounded character, and the movie never sacrifices his self-awareness for an easy dramatic payoff. In the first dance scene between him and Ariel, the two of them start to get down in front of her estranged redneck boyfriend Chuck (Patrick John Flueger), but Renn walks away, insisting that he's not going to put on a show for another guy's benefit. The relationships are well-rendered, balanced and generally naturalistic, even when the town elders succumb to the good-old-boy cronyism in their resistance to the city slicker who comes in to challenge their dusty lawbook. The film's avoidance of obvious conflicts, such as when a stoner gives Renn a joint that he absolutely does not want, rewards older viewers—while every major beat is cliché, in the little moments, the film dodges expectations.

But given all these character, choreography and story similarities to the original Footloose, this sequel can't quite justify its own existence, or at least its independence. The painstaking efforts the film makes to get Renn to that abandoned warehouse for his punch-dancing revolt, for example, are beyond plausibility, even in a dusty provincial Southern town. Or in recreating fight between Ariel and her abusive ex-boyfriend, Brewer goes too far out of his way to provoke Chuck into committing his "unforgivable" act of violence. (Especially since coercing his much-younger girlfriend into sex and then abusing her emotionally was sufficient enough for us to loath him.) And as reassuringly familiar as the choreography may seem, there's no denying that it feels like it came out of a bygone era, even if peripheral characters are performing more modern dance moves on the sidelines.

Wormald and Hough look pretty, dance well, and otherwise perfunctorily fulfill the dramatic requirements of their roles as Renn and Ariel, but it's the supporting cast members that really distinguish themselves. Playing Renn's bumpkin buddy Willard (a role that's the polar opposite of his introspective turn as an accidental killer in last year's Rabbit Hole) Miles Teller is the discovery, lending an irresistible likeability to a character who would in lesser hands simply be comic relief. And McKinnon's performance as Renn's tough but thoughtful uncle Wes saves the film from being a continuous series of cornpone clichés-while McKinnon is as authentic a Southerner as audiences will see on screen, he proves that Southerner doesn't mean sticky sweet or simply stupid, supplying Wes with a sensitivity and intelligence that elevates every scene in which he appears.

As a fan of the original Footloose, I have to admit that even it was an unwieldy and uneven patchwork of melodrama and dance-movie clichés, with the now-benefit of 25 years of nostalgia. But from its small, subtle character choices to its cinematic flourishes, including one of the prettier magic-hour kisses I've seen in a movie in a long time, the latest Footloose is a perfectly fine way to spend a few hours in the theater, even if you keep on your Sunday shoes.