close
You won't check your watch 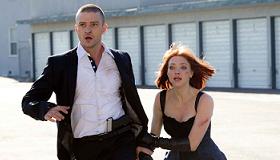 Justin Timberlake's opening voiceover ends as quickly as it begins: "We don't know how the system started." A translation: "We've got this premise: let's just forget about justifiable backstory." After beginning on a weak foot, In Time gets stronger as in this world, time is currency—the price of a cup of coffee could mean the end of your life (alas, for me life doesn't begin until coffee). The working classes grind out their day-to-day, never sleeping in and always operating on their last five minutes, which completely recontextualizes waiting in line or missing a bus. All intellectual principles aside, this is a society in which genetics prohibit the visual signs of aging past 25 years—Olivia Wilde plays Justin Timberlake's mother—thus justifying a cast made only of unilaterally hot people. But all that silliness is quite scenic and the action is bloodlessly low on body count, making the film a decent actioner for pre-teens and and up. The pace is solid and engaging without putting you on the edge of your seat—you won't be looking at your watch, which means it's at least worth the time spent. Box office favors the pretty people so hope can be high—and in In Time's society, hope has the greatest value of all.

You can steal a man's time with a touch, which means that no one walks in the ghetto. But when a suicidal rich man blunders in to his hood, time-poor Timberlake gives a man a hand—and in return, that man hands the post-pop star a century before throwing himself off a bridge. Why would a guy who could live forever kill himself? That's a question for the Time Police helmed by go-to sci-fi guy Cillian Murphy who assume that Timberlake robbed him and ran. Neighborhoods are walled off by class and income—a system devised to keep the poor to their own and protect the proverbial 1%—so Timberlake hops a cab and spends a couple years fleeing to hide out in the upper echelons. The rich must have their own troubles but we don't see much of them, what we see is cold-blooded, baby-faced Vincent Kartheiser, the richest man in this 'burb who claims to be 110 years old. When he introduces his mother-in-law, wife and daughter, all wide-eyeed blondes, he jokes about how difficult it is to tell the difference: "It used to be simpler, or so I've been told." But since Timberlake was born and raised with Olivia Wilde for a mother, he doesn't need a tutorial.

And so our hero meets the rich man's daughter (Amanda Seyfried), a pretty, somewhat thinky, modernist sculpture of a girl. He woos her with skinny-dipping (highly verboten—when you can live forever, why risk drowning), and this inspires her to mouth off about how "The poor die and the rich never live." The greatest fear of the time-wealthy is dying by accident, which means they don't take risks and they're incredibly lethargic. As one says, "Why do today what you can do next century?" To keep his time inheritance, Timberlake takes Seyfried hostage, and when she's done pouting the two go on a crime spree that situates them somewhere between Bonnie and Clyde and Robin Hood and Marianne. Their goal is to steal time from the banks and give weeks to the weary.

The film's greatest crime is that it's premise that only goes 75 percent. If all clocks start at the age of 25, why is there a 7-year-old street urchin begging to pay her bills? If timespan and therefore class are visible on people's arms, shouldn't people have constructed ways of handling that kind of vulnerability? Cillian Murphy's chilly timekeeper is awash in the sort of middle class values that support the system through its injustice—he's the only cop to take any risks and the first to screw up. Really? For as quick tempo and playful as the film is (you could literally drown in the puns) the niggling errors are hard to overlook. Where are the rebellious teenagers? Their green, blinking arm clocks naturally call Logan's Run to mind but these people race to work, they don't fight to live—they have no concept of battle. When Will pulls a gun on Sylvia's bodyguard, the hired man puts his hands up and lays on the ground. That's a real risk on that goon's part—there are all kindsa germs on the ground.

Most dystopian stories project a society that's dead at heart because people have put faith in systems before people. That makes this Robin Hood story seem oddly pragmatic. Though this film had likely finalized its final cut before the Occupy Movement launched, the Metropolis-like metaphor of the city in which the tops really do live above the bottoms, throws its support behind the protestors. Here, the dangerous phrase is "Many must die so few can be immortal." Even when we've all got an equal life span, those seven words pack a punch.