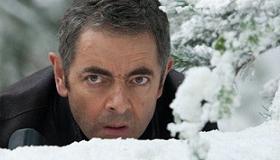 Rowan Atkinson's brand of super-British gawkiness is ideal for physical comedy—he really knows how to use his body for stroppy hijinks. So when his character, MI-7 operative Johnny English, effortlessly bests a revved-up mega ninja, he makes a middle-aged woman swoon. But is it funny or incompetent that every crucial intelligence conversation occurs near an open window? Oliver Parker's newest Johnny English Reborn plays fast and loose with its brand of faux intelligence and sometimes skates into inconsistent logic. The mix of groin injury and over-explanation could totally reach 9-year-olds and a greying Atkinson is still relentlessly lovable. The hipster audience who loved Mr. Bean will groan at these gags, but Reborn's box office potential could grow if the flick was more explicitly marketed to kids.

Secret Agent Johnny English fled MI-7 after his knightship was revoked over an intelligence disaster in Mozambique. (The headlines read "D'Oh-zambique," a new reason to admire the integrity of British journalism after the News of the World kerfuffle.) Since his exile, he's been training with monks, living out the half-joke made by Daniel Craig in Casino Royale about being half-monk, half-hitman. But Mr. Bean never kills anyone—not deliberately anyway. Ill-prepared to save England or the world from the double agents slowly eating away national security in three world powers, Johnny English is called to MI-7 where things are very different than he remembers. At "Toshiba British Intelligence: Spying for You" he meets Pegasus (Gillian Anderson, X-Files), who explains the company's interest in deploying diplomatic dialogue instead of the weaponry and gadgets so glamorously tied to cinematic espionage. Perhaps that's better, since Johnny English gets the gadgets confused anyway. Who wouldn't? The grappling hook is also a pen, the umbrella is a shield and the iPhone is a photo-sending device. (Wait—did you get yours from Q, too?) The predominance of the iPhone is a detail at once surprisingly drab and oddly realistic. I half expected them to discuss the wage decreases and loss of expert service at MI-7, what with those freelancers running down the number of staff daily. What espionage means for Reborn is as loosey-goosey as anything else, which is appropriate: this is an action comedy about a man who's suave and yet still manages to move with all the grace of a chicken.

Of course, they've surgically implanted a love interest in Reborn. Rosamund Pike is a behavioral psychologist whose expertise is reading body language. Her camera and computer set up do for facial expressions what the body scanner in Octopussy did for Maud Adams. But English has learned he can obscure his ungainliness by standing still (it worked to stop that super-ninja). Of course, this saga of barely detectable clues doesn't require British Intelligence to see the danger on the tip of your nose—and the dangers created by the spies themselves are sent-up in Atkinson's climactic showdown...with himself. As English comically wrestles a gun away from himself, the point of national security seems steps away from the point of psychotherapy. The real dangers lie within. Which is okay, because these spies aren't quite ready for prime time.