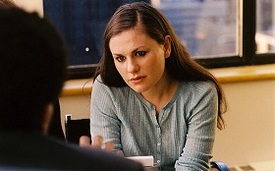 Following years of troubled post-production, Kenneth Lonergan's long-awaited follow-up to You Can Count On Me finally sneaks its way into theaters with a startlingly low-key release. Now an unintentional period film, Margaret follows a New York City high-schooler named Lisa Cohen (Anna Paquin) as she grapples with witnessing a fatal bus accident she feels is her fault. A fascinating, deeply felt film of wild, untamed emotions and probing insights, the film will likely confound whatever audiences find themselves aware it's in theaters.

Shot in 2005, Margaret bears a 2008 copyright, making the survivor guilt at its center feel at first like a direct response to the terrorist attacks of September 11, 2001, a notion made plain during Lisa's history lessons which break down into arguments over the response to 9/11. But Lonergan steadily builds outward from there, adding layer upon layer of nuance to push the film away from its most immediate concerns into a realm where the issues at play feel less topical and more lasting.

In the film's second half, a friend (Jeannie Berlin) of the woman killed in the accident befriends Lisa. They launch into a perhaps ill-fated lawsuit hoping to get the bus's driver (Mark Ruffalo) fired, but instead simply win a cash settlement for a long-lost relative who didn't have much contact with the victim. It is deep, thorny, pungent stuff, real life transformed into the stuff of real, genuine drama. And Berlin's performance offers a mighty reminder of what her infrequent appearances leave missing from the screen.

Early on, Paquin abruptly switches words in the middle of a line reading and it's not totally clear if it's a flub or intentional, as her entire performance is shot through with that kind of live-wire fragility, the simultaneous certainty and unsteadiness of a teenager's emotional life, and you think you know how things will work out but you really have no idea. Paquin's pitch of shocked hysteria and willingness to show the worst of herself—including some terribly unflattering shots of her body—seem to pre-figure the comedy of entitlement of Lena Dunham, while assaying the same tortured obliviousness as Dunham's screen persona. Paquin captures the maddening frustrations of both being a teenager and also dealing with one.

Part of what may have begat the film's prolonged post-production is that it would be so difficult to figure out what to cut—except perhaps the frequent slow, lingering pans of the skyline of NYC's Upper West Side—as what Lonergan seems to really be getting at is the steady momentum of how relationships inter-relate, the cumulative effect of seemingly disconnected events. Lisa's relationship with her mother (notable stage actress J. Smith-Cameron) informs her mother's budding romance with a French-Columbian businessman (Jean Reno). Lisa's long-distance relationship with her father (Lonergan himself in a small part) is in turn reflected in the way she latches onto a relative stranger as an unlikely ally (Berlin). Despite the film's intimidating 2 ½ hour running time—reportedly one minute under what Lonergan was contractually obligated to turn in to retain final cut—it moves with a surprising speed and agility, never dragging or feeling bloated. It all adds up.

The film's title comes from the 19th century poem "Spring and Fall: To A Young Child" by Gerard Manley Hopkins, which includes the line "you will weep and know why" and the film captures a similar sense of being simultaneously inscrutable and transparent. Less the disaster of a movie one might expect and more a movie about disaster: both literal and emotional in its complex, deep-rooted, multi-faceted look at grief and guilt, responsibility and culpability. Lonergan has created a work that will endure. Margaret is worth the effort.