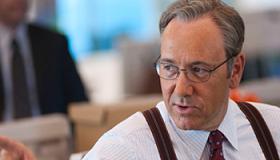 In contrast to icons of the form like Wall Street and Glengarry Glen Ross, Margin Call is a strangely and even willfully enervated look at the world of high finance. Set in a mythical trading firm that finds itself on the brink when a hotshot math whiz (Zachary Quinto) solves a fired risk assessment executive's most troubling incomplete analysis, it's a film that speaks in pauses and whispers, with scene after scene played in real time, as if first time writer/director J. C. Chandor was not so much interested in making a movie as staging a series of one act plays. A vast ensemble of veterans including Jeremy Irons, Kevin Spacey, Demi Moore and Stanley Tucci adds heft and realism, and should insure a small measure of audience interest for Roadside Attractions. But better films on this topic have failed at the box office in recent times, so the brutal laws of Darwinian capitalism suggest Margin Call will be at best a marginal performer.

There are no villains in Margin Call, just a clique of money-driven professionals doing their jobs with varying degrees of proficiency and success. At the bottom of the totem pole is Eric Dale (Tucci), a risk analyst who we meet on the last day of his professional life. The firm still believes itself solvent, but it's downsizing with bland brutality anyway, because that's what firms do. Given 45 minutes to vacate his office, a humiliated Dale passes a flash drive to his protégé (Quinto) saying, "Be careful" as he goes. On the disc is a death sentence in the form of spreadsheets and equations. When Dale's analyses are checked and improved upon, they show that the formulas the firm uses to calculate market exposure have stopped operating in the brave new world of packaged assets, that the firm has been unknowingly teetering on the cusp of bankruptcy for two weeks, and that there's a moral choice to be made: knowingly dump billions in worthless assets on unsuspecting institutional clients, or face the music and cease to exist.

As an indictment of corporate malfeasance, Margin Call is oddly muted and perhaps a bit overgenerous to its captains of financial industry. Chandor's point seems to be that the amorphous and inscrutable financial system is to blame for our current global recession—that it is an unthinking force, like a wind or a tide, rather than a human institution. Chandor suggests that it's naive to expect capitalist institutions to concern themselves with anything more than survival and enrichment. Fair enough, but hardly a major or disputed point. It almost seems as though Margin Call‘s main ambition is to refute the cinematic hysteria directors like Oliver Stone bring to this topic, rather than stake a fresh claim of its own. But the lack of verve and drive these ambitious characters show in a crisis seems neither dramatically satisfying nor true.

Given so much breathing room, several of the actors have ample space to shine. Paul Bettany is especially effective as a lonely exec that spends $75,000 a year on prostitutes, etching a graceful portrait of bittersweet melancholia where an unsympathetic jerk might have been. Jeremy Irons is uncharacteristically gregarious as the twinkly but steely corporate patriarch, while Spacey and Tucci are quietly effective in less intricate roles. Demi Moore is absolutely wasted in a part that echoes her bitch goddess executive from Disclosure, but only enough to remind us of how far the mighty have fallen. But Margin Call's rigorously modulated tone, while it gives the actors time to breathe, also gives the audience more than enough time to lose interest. A minor artifact set against the major scandal of our time.