close
Michelle Williams makes an Oscar bid with little support from the movie around her.

My Week with Marilyn 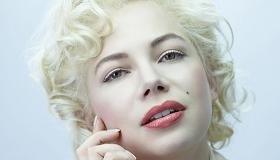 My Week With Marilyn is a minimally thought-through Oscar nomination campaign for Michelle Williams' showy and impressive performance/impersonation of Marilyn Monroe, the core of a film that barely exists. Based on two memoirs by Colin Clark about the tortured production of the 1957 Laurence Olivier-directed comedy The Prince and the Showgirl, this might more accurately be titled My Week Of Seriously Thinking I Had A Reasonable Chance of Having Sex with Marilyn Monroe. Despite Monroe's predictably bristly response to Olivier (Kenneth Branagh) when he tells her to "try to be sexy," the film reduces her to an object of lust for the vacantly depicted Colin (Eddie Redmayne). Incompetently assembled by veteran TV director Simon Curtis in his theatrical debut, Marilyn's so flimsy and low-stakes not even Williams' typically rigorous dedication and performance can lift it. The prospect of a star impersonation and occasional laughs may draw moderate crowds.

Clark (a successful TV documentarian who died in 2002) wrote two books about his entry into the film business as third assistant director to an increasingly exasperated Olivier, who struggled to direct and act opposite the erratic actress. With Monroe determined to apply Method acting with help from her acting coach Paula Strasberg (Zoe Wanamaker), production ground to a halt. Clark's first book on the subject—a compilation of his diaries from the time period—covers the production in acerbic detail, including his unimpressed initial response to Monroe: "nasty complexion, a lot of facial hair, shapeless figure."

That tone's absent from the film, which owes a lot more to Clark's gushy second book: 2000's My Week With Marilyn, in which Clark dramatically confessed to acting as a disposable if friendly ear to Monroe while she was on the outs with both Olivier and husband Arthur Miller (Dougray Scott), who'd flown back to the States to see his children. In Clark's telling, Monroe took a liking to him and they romped for a day across the British countryside, during which they kissed while bathing naked in the river, which was pretty much the extent of the (absolutely unverifiable and) tepid non-affair. Reviewers were unimpressed, with one wondering whether the dull story made Clark "the wettest 23-year-old in the history of the world or a complete fantasist."

If anything, the book's Marilyn is even more hysterical than the film's, offering up the actress' confessional ramblings like, "For the first time I feel like I was part of nature" as she describes her rural adventure, or her blunt musing, "Why do I take all those pills? Why do I worry about what all these men think?" The film's Monroe isn't so humorless or eagerly excited, but the romantic "drama" otherwise hews closely to Clark's bloodless narrative in the form of endless faux-titillation. Branagh's hammy impersonation of a self-regarding Olivier is more amusingly annoyed; he's jowlier than he should be but gets the best line, saying teaching Monroe to act is like "teaching Urdu to a badger." Williams' face never quite convinces as Marilyn, but the dedicated actress once again takes playing an internally conflicted woman seriously, winningly relaxation only when her face lights up in ever-fresh surprise as she realizes her effect on the public. But Redmayne's Clive is a drip whose presence is a dramatic black hole: as Monroe freaks out, he becomes her sounding board, driving Olivier out of the picture. There are no surprises to this Marilyn: she's sexy, mixed-up, vaguely tragic and that's about it. The drama never gets more excitable than some mildly ominous close-ups of pills by her bedside, and the viewer's exasperation with Clive's fantasies about whisking Monroe away can only grow in the absence of anything else meaningful to think about.

Indifferently shot, My Week With Marilyn is manically cut by editor Adam Recht: in the first 30 minutes, there's a new shot nearly every three seconds, as if to covey energy through sheer image-changing. The effect is annoying and sometimes incoherent; during a simple 30-second speech by Branagh, Curtis and Recht cut between no less than four different shots of his face, all of them randomly timed and from equally arbitrary angles. After frantically slathering on jazz stand-up bass to convey upbeat period good times, the final stretch reverts to its opening maudlin piano, tinkling to convey sadness. The results are perfunctory, lugubrious and historically questionable.