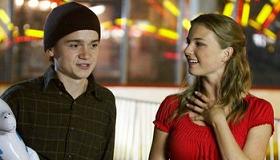 Being a teenager is difficult enough, but Jonathan Segal's Norman takes high school discomfort and disaffection to new levels, with his titular character trapping himself in a lie that all but guarantees horrific emotional fallout for all involved. Segal's film tries to straddle the line between darkly funny and just plain dark, but even with a game cast and an offbeat premise, Norman is a disquieting outing with little in the way of honest payoff. AMC Theatres is releasing the film through their own "AMC independent" label and that small release, paired with limited market awareness for the film, will likely guarantee that, despite its festival pedigree, the film won't get in front of many eyeballs and will likely disappoint those it does.

Dan Byrd stars as Norman Long, a special brand of whipsmart high school senior that uses his cracking sarcasm to mask deep personal pain. Norman's mother has recently and unexpectedly perished in a horrific car accident (Norman keeps a picture of the crash site, just one of the many ways he inflicts further pain on himself). And, as if the loss of one parent was not enough to put up plenty of barriers around Norman, his doctor father (a criminally misused Richard Jenkins) is very slowly and very obviously dying of stomach cancer.

Yet, despite a bleak future for young Norman, things improve immeasurably when new student Emily (Emily VanCamp) sets her sights on him. While Norman is pleased that Emily has taken a shine to him, it's clear the kind-hearted transfer student isn't hugging him in the hallways because she's desperate for a sardonic boyfriend. Emily is sweet and sensitive, to be sure, which is precisely why she's interested in Norman, who seems quick to forget that their second interaction was marked by his "performance" of a "piece" about a teenage suicide attempt. Emily isn't dumb, and it's fairly clear she's at least somewhat bent on saving her moody-eyed classmate. Which is what will ultimately keep her sticking around when Norman announces to his loose-jawed friend James (Billy Lush) that he is the one who has cancer.

Norman's lie spreads to the entire student body, including Emily. Even his equally-sarcastic English teacher, Mr. Angelo (Adam Goldberg), succumbs to the story and crumbles into general platitudes that praise Norman and his wit and strength. Norman's lie functions essentially as wish fulfillment —it gets him attention from his peers, affection from Emily, understanding from his distant best friend and a notoriety that doesn't require any sort of merit. Yet, it only leads to increasingly uncomfortable situations, as Norman's enjoyment of his lie's rewards builds exponentially, all while the inevitability of it being discovered hovers just out of frame.

Yet what's most unsettling about both Norman the film and Norman the character is the ease in which he slips into his lie, resorting to physical changes like weight loss and head shaving, even as he's also inflicting emotional changes on all those around him. Norman's lie is most offensive because it's almost totally unnecessary. Norman is not just enduring the typical teenage trials and tribulations, the standard slings and arrows that would precipitate such a lie for attention and pity. Norman's life is hard enough already, ripe for pity and understandably laden with some tangled emotional issues, but taking on his father's illness as his own has the unfortunate side effect of making Norman just plain unlikable, despite the fresh talent that Byrd brings to the film.

The film has done well for itself on the smaller film festival circuit, collecting awards in Chicago, Rhode Island, San Diego, Woodstock and Breckenridge for various elements, including directing, acting, and editing. Norman is only director Segal's second feature (his first was an under-seen indie from back in 2004 that starred Amy Adams just before she gained critical fame with her work in Junebug), and screenwriter Wingate's first. It's likely Segal and Wingate's understandable greenness in feature work that keeps Norman from achieving anything beyond a somewhat compelling premise that slackens beneath an uneven and unsure tone that weakens the entire outing.