close
Music is (in) the air 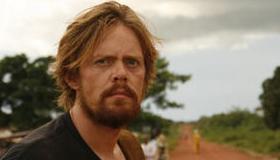 Based on the unpublished memoir of ethnomusicologist Louis Sarno, OKA! watches post-grad Larry (British actor Kriss Marshall) learn he has a failing liver. His first instinct is to take his ailing body back to Central Africa, where the Bayaka Pygmies have embraced him into their tribe. If you take the film as a magical invocation of spirits and sounds, the Bayaka shaman beckons him in the form of a rusty liver. If you're a more literal sort, Larry's looking for a final resting spot. But he's not actually the restful sort so when he reaches the tribe and sees them divided, he takes immediately to his hunt for a possibly mythic horn they call the Molimo. The pygmy's shaman has receded into the forest where it's pure and things are as they ever were; but the tribe, who their neighbors regard as beneath them, have fallen into disrepair and lost touch with their traditions and roots. Larry's appearance is simultaneous with that of a lurking Chinese logging magnate (Will Yun Lee) who wants to buy the rights to log the Bayaka's forest. The mayor (a great Isaach De Bankolé) wants to help, but to do this they have to prove the Bayakas are a threat to the endangered elephants. Larry's Molimo only appears during the elephant hunt. Clearly this coincidence smacks of magic and legend, and everything in this world is tenuous and temporary, but with the sense of the eternal we reserve for folklore. OKA!, like the mysterious horn the characters hunt, is a real find.