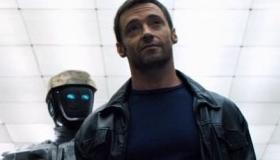 Although the marketing looks like Transformers 4, Real Steel is the real deal, a Rocky with robots that ought to have audiences standing up and cheering. The crux of this slightly sci-fi story set in a world where human boxing is outlawed is that 11-year-old Max (Dakota Goyo) is forced to bond with his estranged father Charlie (Hugh Jackman), an impulsive, bad luck former heavyweight contender, when they back a down-and-out robot for one more round in the ring. Underneath the busy, noisy action beats a human heart pumping with the red-blooded emotions that have worked for boxing films since the original Champ first grabbed moviegoers in the '30s. This exciting, funny and heartwarming movie is for everyone—and with family movies standing tall at the box office, it should muscle a nice fall run. Expect great word of mouth and strong returns, possibly even a knockout punch at the ticket window.

Sylvester Stallone has mined this boxing arena underdog story at least six different times with various Rocky retreads. Sure, it's a shopworn tale of redemption, but there's always a new twist. The twist in director Shawn Levy's take (let's call his Robby) is that it's set in 2020 where the ring is now dominated by giant steely-eyed robots. Jackman's Charlie Kenton is a down-on-his-luck woulda-been contender now reduced to the humiliating role of hustling small time robots in any fight he can drum up for them. His stable is not exactly the pick of the litter either—when you call them a pile of junk, you're just being literal. As if he's not having enough trouble tending to his scrap metal life, here comes son Max-a boy he barely knows-who turns out to take after his dad: he discovers a near-dead robo-boxer, christens him Atom, and nurtures him into fighting shape and into a bout with the World Robot Boxing League champ, the indomitable Zeus.

With Charlie's cynicism about Atom's chances at full tilt, Max proves the robot's worth and through the process begins to repair the relationship he never had with his dad. At its core, Real Steel is really a father-son story about redemption-and while that's as familiar as a boxing movie about a comeback king, Levy (Night At The Museum) gives the tale real cinematic scope and weight. Unlike Transformers, the spectacular metal-on-metal set pieces, all gears and shrapnel, aren't meant to carry the day alone. Levy knows this is a human story—really—set in this not-so-distant steel universe. Sure, compare it to Transformers but that match-up only makes Real Steel look even better. The screenplay by John Gatins is grounded in traditional fight films and struggling family dynamics. Its inspiration isn't the toy box or video games, but rather the little known Richard Matheson short story, "Steel" that became a 30-minute Twilight Zone episode in 1963 starring Lee Marvin as a flesh-and-blood boxer in a steel-and-wires world. The iron framework of that idea is here, but the father/son angle is all new-and in fact it's the wholly invented new character of Max that really drives the action, thanks in no small part to a remarkable kid performance from Goyo, a major discovery from a Toronto open audition. Jackson is also terrific and appealing, despite making Charlie a character on the ropes and a terrible father. Evangeline Lilly and Hope Davis have small roles and the woman and former woman in his life, but the love triangle forged here is between Charlie, Max and Atom. With excellent cinematography, effects and pacing, Real Steel is a real winner.