The Adventures of Tintin: The Secret of the Unicorn 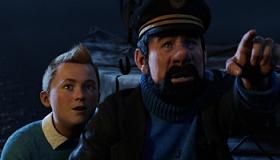 Poised for surefire box office success when it opens across Europe and other international territories October 28th, Steven Spielberg's first animated foray, The Adventures of Tintin: The Secret of the Unicorn should also make waves even in the U.S. where the iconic Belgian property is not as well-known. (In the states, Tintin opens two months later on Dec 21). With the best use of motion capture yet, Spielberg has translated the story of the youthful Tintin, his spirited pooch Snowy and the eccentric Captain Haddock into a first class action adventure that serves as the perfect cross between Pirates of the Caribbean and Spielberg's own Indiana Jones series. Bound to spawn many sequels, this collaboration with co-producer Peter Jackson will set off massive fireworks at ticket windows around the world, which should goad American audiences to finally figure out who Tintin is in time for the flick's holiday release.

Based on the 23 comic books penned by Belgian artist Hergé [real name Georges Rémi] between 1929 and his death in 1983—all enormously popular in Europe but little known in America—The Secret of the Unicorn should have no problem appealing to kids (and their parents) regardless of mother tongue. A good yarn is a good yarn, and this treasure hunt caper is so loaded with fun and pure adventure that audiences everywhere will be swept up in the magic. After spending his 2011 producing questionable flops and weary minor hits, it's almost as if this material has re-energized Spielberg and brought his inner-child back full force. And for those wondering if the 64-year-old director could crack the cartoon format, this is easily not only a first-rate example of animated storytelling—he even shows off the exponentially great improvements in the actor-centric performance capture process. Dead eyes and flat action? Not here.

Hip British trio Steven Moffat, Edgar Wright and Joe Cornish (responsible for, respectively, Doctor Who, Shaun of the Dead and Scott Pilgrim vs. The World and the new cult hit Attack The Block) have stitched together a script that borrows from several different Tintin comics, mainly Secret of the Unicorn. It all gets going when intrepid journalist Tintin (Jamie Bell) purchases a model of a famed ship, the Unicorn, that's also eagerly and mysteriously being sought by a cagey man named Sakharine (Daniel Craig). Helped by his ever faithful companion Snowy (the smartest dog this side of Lassie), Tintin discovers the model ship contains a major clue to the whereabouts of a missing treasure. Enter the Karaboudjan, a ship run by the hapless, drunken Captain Archibald Haddock (Andy Serkis) who has ancestral ties to the 17th century captain of the Unicorn. Tintin and Haddock join forces to continue the ultimate quest-detouring, of course, on several harrowing sidetrips.

Employing long-time editor Michael Kahn and composer John Williams, Spielberg seems like a kid in a candy shop particularly snatching up everything Jackson's WETA digital effects team (also responsible for this year's Rise of the Planet of the Apes) can imagine. In addition to his producing credit, Jackson earned a second one as Second Unit Director, and the marriage of these two movie titans is evident. Production values are over the moon, and if there is any complaint at all it's that the non-stop action is sometimes too frenetic. Fortunately, it's all tempered by great character work from Bell, Craig and particularly Serkis, who after Jackson's King Kong and Lord of the Rings, plus Rise of the Planet of the Apes and now Tintin is clearly the king of performance capture—maybe his one-two punch as Haddock and Caesar will finally make the Oscars recognize his skills. There's also fun work from Nick Frost and Simon Pegg as idiotic look-a-like Clouseau-like officers who turn up the laugh quotient. Production is being co-distributed internationally by Paramount and Columbia, and is sure to be a holiday treat for both studios' bottom lines and anybody who makes it to the theater to celebrate an 82-year-old franchise given fresh life.