close
A comedy to crow about 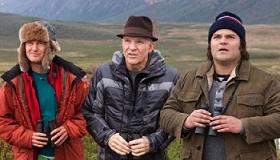 In their official press notes for The Big Year, 20th Century Fox almost goes out of its way to avoid even mentioning the film's key plot point: it's set around the hobby of bird watching. No need to be shy about this, guys—it's original. On the surface, this might not make the best material for a movie, but in the hands of three such gifted farceurs as Steve Martin, Owen Wilson and Jack Black, it's pretty close to perfection. Focusing on the private lives and very public pursuits of these three disparate guys, The Big Year turns out to be one of the smartest and funniest films this year. And although its comic style is more subtle than most in the genre these days, box office should fly strong based on the affection for its three stars. At the very least, it should repair the bad PR our feathered friends got 50 years ago from Alfred Hitchcock's frightening The Birds.

Under David Frankel's (The Devil Wears Prada) assured direction, The Big Year is a sweet old-fashioned comedy dependent on character development over gross-out gags that uses its gorgeous British Columbia locations to top advantage. As a travelogue, it's almost a wide screen version of TV's The Amazing Race, only here it's centered on a year-round quest by three completely different men who are what they call in the trade, "Birders." They will compulsively drop what they are doing at any moment to get in a plane and travel long distances simply to view and detail sightings of exotic species.

Of course, the real "sightings" are what they discover about themselves during the course of their unusual journeys. Stu (Martin) is a wealthy businessman, happily married for many years but still not satisfied with what life is offering him as he nears retirement age. Brad (Jack Black) is a computer code writer who lives at home and can't seem to connect with whatever his life's calling is really supposed to be—but he sure knows his birds. Finally there is Kenny (Wilson), a very successful contractor who is the closest thing to a compulsive gambler, or in this case, compulsive birder. He can't help himself even if his marriage to Jessica (Rosamund Pike) is falling apart as a result. His world record of 732 different sightings in a single year is everything to the intensely competitive birder.

Though the film is a little slow to take flight, the three main characters are nicely fleshed out and delightful. Martin is at his most restrained in recent years—he's perfectly cast as the elder statesman of the "sport" nicely underplaying the comedy opportunities lobbed at him. Also more quiet than their status quo is Black whose slacker Brad is really a good guy underneath the sloth. Wilson is the most intense and if he doesn't quite hit the comic heights of his recent turn in Midnight In Paris, he perfectly complements his two co-stars as well as Pike, who nails his long-suffering bird-widow wife. There's also good work from vets Brian Dennehy and Dianne Wiest as Black's parents and Anjelica Huston as the captain of the boat the trio use for transportation to the remote locations best for birding. All in all The Big Year will leave you feeling like you have something happy to tweet about.