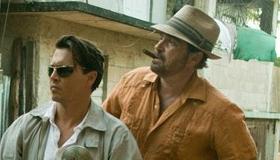 A sweltering bout of sex is interrupted by a vinyl recording of Hitler's greatest speeches; Johnny Depp swigs gulps of 470-proof booze in order to repurpose his mouth as a flamethrower; psycho-tropic substances are used by heroes to shape the world in their own image. Yeah, "Dr." Hunter S. Thompson is back to pay us a visit from beyond the grave, this time in a film less keen to resurrect "The Mad Doctor" than it is to embalm him. The fun and feather-weight origin story of a twentieth century superhero of a very different stripe, The Rum Diary—freely adapted from Thompson's early, quasi-autobiographical novel of the same name—follows a stringy cypher for the God of Gonzo named Paul Kemp (Depp) as he arrives in Puerto Rico circa 1960, a closet novelist gearing up for a steady job at a local paper called The San Juan Star. Over the course of two rather frantic hours, Kemp's search for his voice as a writer will lead him through cockfights, shady real estate deals and ultimately a pivotal decision that will define his future as America's crazed moral center. Vividly bottling a long-gone era (Dariusz Wolski's sweet Super 16mm cinematography is at once both organic and softly lyrical), The Rum Diary is so visually enchanting that many viewers may be too lost in a haze of charm to care that the film never develops Thompson's then-nascent wisdom any further than the young writer did in the novel itself. FilmDistrict's low-key release of this drug-fueled portrait will likely prevent The Rum Diary from hitting the sort of box office numbers to which Johnny Depp has become accustomed, but legions of viewers eager for another trip like Terry Gilliam's Fear and Loathing in Las Vegas could make this long-delayed adaptation a quiet success.

Kemp pops up like a hungover badger, naked down to his boxers in a devastated beachfront hotel room. His clotted eyes are less bloodshot than broken, and it's his first day of work. We've seen Depp do this routine before—he describes stepping into the role of Kemp as, "like playing the same character [from Fear and Loathing] as he was learning to speak." Depp is a lot less affected and rattled as Kemp than he was as Raoul Duke, and he operates with such precise control of his craft that the muscles in his face seem as if they're first discovering his most iconic tics and inflections.

Kemp's first pivotal encounter on his new island home is the editor-in-chief of the fading San Juan Star, a rankled man named Lotterman (Richard Jenkins) who describes the paper's readership as "Vividly average" and immediately assigns Kemp to cover all the worst beats. Kemp's only ally in the office is Sala (Michael Rispoli), a kaput sack of a guy who's long-resigned himself to his photography gig, as if the last tatters of his ambition were the tariff he paid to move to the island. What follows is a traditional story by any standard, as Kemp gets up to some not-too-crazy shenanigans, receives a sudden promotion, and becomes of interest to a chiseled businessman (Aaron Eckhart, exuding obvious menace) and his blank but absurdly fetching fiancée (Amber Heard). And so it goes. Kemp shaking things out for almost two hours, bouncing around Robinson's supple Puerto Rican spaces, slowly getting hip to the idea that some of the folks who appear to live on the straight-and-narrow are ruining the world for their own gain.

If that sounds like a rather callow epiphany, remember that The Rum Diary is at heart the work of a young man, banged out on a rickety typewriter by an open window somewhere in 1959, when Thompson was but 22-years-old, six years before his breakthrough pieces on the Hell's Angels for The Nation. Given the rather stringent fidelity of Robinson's adaptation, it follows that his adaptation takes pains to play like the work of a young man, despite the fact that Robinson—the venerable but now senescent filmmaker responsible for such pivotal British films as Withnail and I and How to Get Ahead in Advertising—had to be forcibly dragged out of retirement by Johnny Depp in order to helm this thing.

Robinson retains the story's formative feel by presenting Puerto Rico as a playground, but more pivotally as a detour. The Rum Diary functions as a defining episode in a life that the audience must be able to envision before the drama and after; the film's stakes are entirely rooted in how the events recolor Kemp's post and prior existences, and Robinson approaches it as if charting a Mario Kart shortcut under the influence of some serious hooch. Kemp submits himself to mayhem, chance and unfamiliar terrain in order to return to the place from which he first deviated off-course, armed with something special. Even as it sinks in that The Rum Diary strained to fudge an "R" rating just to satisfy Thompson's wild reputation, Robinson is able to maintain a certain degree of urgency. Sure, the adventure is more than a bit too coy and obvious—if American capitalism was ever this simple, Ken Kesey's "Combine", the rulers of the asylum, would have come with an off switch—but it's all so comfortable in its context, so sweet and selfless, that it goes down real easy.

While it may not be ground breaking stuff, The Rum Diary should register as a delirious ode to the 99%. In fact, it's impressive how relevant and seamless the whole film is, especially considering that Robinson's last directorial effort was the 1999 disaster Jennifer 8, and that he's a self-admitted alcoholic who supposedly wrote the script over the course of an epic bender. For all of its thin hedonism, Robinson's film has a lyrical way of underscoring how America's favorite myth-makers always seem fated to confront the things that most persistently threaten our liberty, often eons before the rest of us even realize what's at stake. Beyond that, Robinson's approach is far too fond and modest for The Rum Diary to be much more than a loving tribute to a dear friend, an homage that lacks the courage to be Gonzo, content instead to be vividly average.