close
Boys will be boys 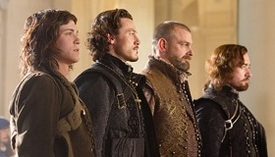 Athos (Matthew McFayden) enters, like Roger Moore, from water—peeling off a layer of armor to reveal the jacket and pants of a man of status. That tiny nod to James Bond has a subtlety that's disproportionate to the rest of the film's bombast and excess. Still, it's nice to see references to the progeny of Alexandre Dumas' action/adventure classic. The story of an aspiring Musketeer who reaches Paris to find a moronic king, power-hungry religious leaders, and his would-be idols, downsized-and-out, Three Musketeers could be a story about second chances but it misses that mark. Trash-action director Paul W.S. Anderson's (Alien vs. Predator) finds no cultural purpose for this rather literal adaptation of the Musketeers, but it's not so horrible it deserved to be protected from the cold eye of film critics. Even if the film does nothing for fans of the book, reviews won't likely prevent Anderson's small, but forceful core audience from buying tickets.

D'Artagnan (Logan Lerman) is headed to Paris to attempt to join the Musketeers, a team of prestigious servicemen-in-arms. Sadly, his farmland home is so far enough from the city, news never reached him that the King disbanded his heroes. Three celebrity soldiers remain: stealthy leader Athos (McFayden), Bluto-like Porthos (Ray Stevenson) and half-monk/half-assassin Aramis (Luke Evans). Yet, since the trio's betrayal at the hands of Milady de Winter (Milla Jovavich, aka Mrs. Anderson, miscast), they've been forced into different fields. A year after their heyday, Aramis is a meter maid, Porthos seeks out sugar-mommas and Athos is one of many town drunks. D'Artagnan comes to town and invites the Musketeers to an illegal duel that gets crashed by a royal guard. Advisor to the dork-king (Freddie Fox), the Cardinal (Christoph Waltz, again with the wrong accent) is the puppet master. His plan is to lure the Duke of Buckingham (Orlando Bloom, outfitted like Duran Duran) to sign a peace treaty with France. Buckingham will have no hand in it—mostly because he's concocted a war machine built from plans stolen by Milady in the first scene. Romantic intrigue is implied, but the real heat is from the attractively violent set pieces and the occasional glimpse of Milla Jovavich in a corset.

Milady is a double agent, but her real contribution to the story is exposition. She explains each character's agenda and discusses the strengths and strategies of each of the Musketeers. Her blatherings undo the stuff action movies are best at: show. Oddly, even though she's played by one of the greatest action heroines, when she runs across a floor dodging spiked bullets, her movements are unfocussed and fleshy—it's as if we're watching her courageously luck into survival. And luck is something the Musketeers lust for, likely because they have it in spades. These heroes waste no breath removing iron chains and handcuffs, but their ill-fated opponents are pinned down under the weight of fallen furniture. A burnt-out chair nearly consumes Orlando Bloom. What a pathetic way to go.

Film historian Larry May had this really great theory about Douglas Fairbanks, one of cinema's more lovable Musketeers. He thought Fairbanks represented a new brand of masculinity for his era, one both sporting and exuberant, a rogue of boyish, jaunty charms. Perhaps these action heroes and Waltz's uber-paternal villain are the antidote to today's sloppy Seth Rogen man-children comedies and Danny McBride's pot-infused action films. Though the Musketeers are their era's John McClane, they're dressed in ruffles—how much less threatening can you get?