close
A Gentleman's Pass the Franchise to the Left-Hand Side 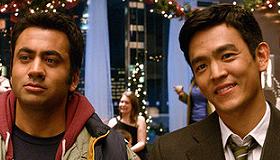 The third (and last contractually-obligated) Harold & Kumar film, A Very Harold & Kumar Christmas in 3D, combines the low-brow stoner-scapades of the first two films with, for no other reason than the hell of it, the high-tech majesty of 3D. In this edition, John Cho and Kal Penn feud and make up on a merry Christmas Eve full of danger, drugs, dick jokes and Danny Trejo. This isn't high art, but the return of screenwriters Jon Hurwitz and Hayden Schlossberg is a good sign, and the film's chuckles, ranging perhaps a bit too far and wide, will make for a nice afternoon of laughs, especially if your matinee is a little after 4:00 in the afternoon. "Hasn't 3D kind of jumped the shark?" Harold asks his assistant Kenneth (Bobby Lee) after Kenneth stares at the camera shoots finger-guns into the audience, but the 3D gimmick will hopefully boost theatrical returns so audiences can fully enjoy such moments as glowering, looming Danny Trejo physically express his love for Christmas trees in a blurt of fully-dimensionalized and disgusting wonder.

Like some madcap comet of eccentric orbit, the Harold & Kumar films crash into the pop consciousness every few years to mess with our collective heads. The first, Harold and Kumar Go to White Castle was a political statement of a low-budget comedy, where the joke was that the slackers were the Korean dude and the Indian guy. But John Cho and Kal Penn, even at their worst, have two things no CGI can fake-charisma and comedic timing—and both pumped the first film full of odd, unlikely life and good humor. The second, 2008's Harold and Kumar Go to Guantanamo Bay was as odd a slice of pop protest and satire as one could ask for, if you were asking for such a thing while incredibly high.

Now we get A Very Harold & Kumar Christmas in 3D, which does not leap into 3D so much as wander into it, blinking with bloodshot eyes. Director Todd Strauss-Schlossberg—making his feature debut—is trapped in the paradox of franchises, where adding new characters takes time away from characters we already know and like. He navigates those waters fairly well, and his new additions fare well, like Trejo as the fearsome father to Harold's wife Vanessa (Paula Garcés) with a Cosby sweater briefly concealing his gang tattoos. It's the destruction of Trejo's Christmas tree—hand-grown—that forces the now-distant Harold and Kumar in search of a replacement and through a merry series of adventures. (Let it be said that any film which only briefly uses Patton Oswalt and Thomas Lennon has an embarrassment of riches.)
Series MVP Neil Patrick Harris makes another appearance as NPH, an id-inflected drugged-up horned-out incarnation of himself; the actor's song-and-dance skills get a workout, and give the film its best 3D number, a musical Christmas pageant full of black-lit Busby Berkley dreams and mistletoe-and-holly bedecked cheese. (Other attempts in 3D—ranging from bullet-time tree heists, showering nun digressions and a claymation interlude with one funny squirrel joke and one unfunny dick joke—vary in their joy.) And, again, Cho and Penn are easy to watch, know the characters and know how to sell a joke. There's nothing here as emotionally satisfying as the two's Wilson Phillips sing-along in the first film, but there's also nothing as dreary as the entire Meet the Fockers trilogy.

This film concludes the contractually-obligated part of Cho and Penn's work as Harold and Kumar, with more than enough chance that the lads will be back, as the film itself notes with a wink. Even if that takes paying Cho and Penn a little more—and oh, what I'd give to see those negotiations themselves as the next Harold and Kumar film—it's hard to argue with the first two film's formula of spending $21 million to make $67 million in theaters, never mind the more lucrative environments of home video, where the target audience has money as green as the weed they smoke. A Very Harold & Kumar Christmas in 3D has enough laughs, enough good will and enough squirrely strangeness to make you hope that we get to hold on for one more film—as long as Cho, Penn and co-writers Hurwitz and Schlossberg keep the contact high of the saga's biggest laughs from becoming a second-hand joke.