close
This stocking's at least half full 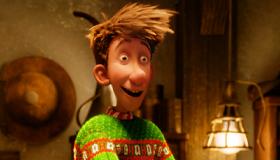 Oscar-winning Aardman Animation—the geniuses behind such stop motion classics as Chicken Run and Wallace & Gromit: The Curse of the Were Rabbit—are back and now teaming with Sony Animation for their second CGI film, the holiday-themed Arthur Christmas, which should spread plenty of joy this season but doesn't break any new ground in Christmas-y cinematic concoctions. With a plot revolving around Santa's most inept son who embarks on a race against time to make sure every last kid has a present on the big day, there is certainly enough sense of the season and cheer to make this a success, but killer competition for the family trade from the likes of The Muppets and Hugo and Happy Feet Two might make the going a little tougher than if it were released at a less crowded time of year. But then again, when are you gonna release a Christmas picture like this—Easter?

Actually, it's the Easter 2011 comedy Hop that this film most closely resembles. Both deal with the errant child of a legendary figure (Santa Claus here, the Easter Bunny in Hop) who sets out to make their own name in the shadow of their famous dads. In this case, Arthur (James McAvoy) tries to save the day when his brother Steve's very high tech Christmas Eve operation misses just one child of all the billions the reigning Santa (Jim Broadbent) managed to hit. He enlists the help of his grandfather, the slightly kooky Grandsanta, as well a gift-wrapping zealot of an elf named Bryony to join him on a mission impossible to rectify his father's mistake before sunrise. Of course, there are lots of complications and detours along the way as the trio-along with their faithful but none-too-swift reindeer-encounter unforeseen problems on their quest.

Animation here is top notch but not quite as inventive as Aardman's stop motion efforts, particularly the Wallace and Gromit films and shorts. But clearly they are going for a wider audience than those films reached, and standard CGI is the way to do it. Director Sarah Smith doesn't dazzle us with the visuals but competently tells the rather predictable story with all the style she can muster. Arthur Christmas doesn't appear too interested in shaking up the formula this type of holiday film follows but it does have a secret weapon in its stellar, mostly British voice cast lead by McAvoy who brings a nice sense of sweetness and sincerity to his likeable goofball Arthur. Hop's Hugh Laurie is here too playing Steve, the older brother and Santa heir-apparent whose Christmas spirit is dwarfed by his ambitions. Jim Broadbent plays Santa fairly straight and that's fine, but the real kick of the cast is Bill Nighy's Grandsanta, a truly inspired senior citizen who steals every scene he's in. Special mention also to Ashley Jensen as the delightful elf Bryony.

Aimed at kids, Arthur Christmas could be a little trying if you're over 10, but if you want an easygoing flick to get you into the mood for the holidays you could do a lot worse, although Justin Bieber's annoying end credits rendition of "Santa Claus is Coming to Town" might have you running for the exits.