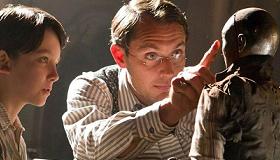 Hugo is not only a great family film—it is a great film, period. Magical and imaginative, this eye-popping masterpiece from director Martin Scorsese will transport audiences to a place they won't believe. Based on the Brian Selznick children's classic, The Invention of Hugo Cabret, Scorsese and screenwriter John Logan have crafted a remarkably vital adventure about an orphan who takes care of the clocks in a massive Paris train station that's also a valentine to the dawn of movies. In doing so, they've made a movie that transcends nearly every other film ostensibly aimed at kids (but clearly, they aim much, much higher). Because Hugo is a period piece that doesn't hit all the obvious beats of the kidpic genre, it may require, wait for it—patience—from younger viewers. It could lag behind its stiff competition for family dollars this holiday season, but it certainly deserves to be a success and hopefully Paramount will back it with the faith that there's a cultivated audience who will show their appreciation.

It's an atypical flick for Scorsese: his first family film and his first 3D film. But Hugo incorporates the best, most sophisticated use of 3D in any film ever—and yes, that includes Avatar. With images of startling depth, Scorsese's clearly loving his new toy. The train station setting, magnificently designed by the great Dante Ferretti, serves the story's purpose and proves to be the perfect playground for Hugo (Asa Butterfield) who befriends a toy seller, Georges Melies (Ben Kingsley) with a secret past. It is through him that Hugo finds his true calling, and that audiences get a crash course in cinema history that takes up much of the third act. In particular, Scorsese and Logan invest their considerable knowledge and love of movies to play tribute to Georges Méliès, the director of the 1902 classic A Trip to the Moon.

There hasn't been a more competently and stunningly crafted motion picture to come along in years with ace cinematography by Robert Richardson, expert editing by longtime Scorsese editor Thelma Schoonmaker, Ferretti and Francesco LoSchiavo's sets and design and Howard Shore's exquisite music. Acting by Butterfield can be a little stiff, but is more than compensated for by the lovely Chloë Grace Moretz as his friend Isabelle and the Kingley's very commanding turn. Among those who inhabit the station are Sacha Baron Cohen, very funny and imposing as an intense inspector, Emily Mortimer as a flower sales girl, Frances De La Tour as a pastry shop proprietor and Richard Griffiths as her suitor, along with a small role from legendary Christopher Lee as the book seller.

For cineastes, Hugo is truly heaven and its recreations of the making of Melies' A Trip to the Moon is inventive and breathtaking. Along with the new black and white silent The Artist, silent movie lovers are in for a rare treat—and, indeed, Hugo is a rare movie.