close
The stuff of legend 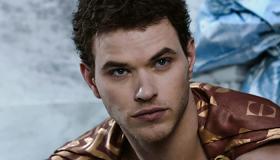 Spectacle and spectacular are often confused for one another in stories of epic adventure, but Immortals is the rare film where they are one and the same. Tarsem—a gifted filmmaker who sometimes sacrifices storytelling for visual sumptuousness—lacquers a straightforward narrative to his decadent directorial DNA, producing a genuinely mythic tale of a mortal who becomes a fulcrum between the well-meaning meddling gods and the villainous mischief of man. With any luck the success of its more-superficial stylistic antecedent, Zack Snyder's 300 will rub off on Immortals box office returns, but more likely the flick is poised for cult adulation, not mainstream glory.

Henry Cavill (of TV's The Tudors and our next Superman) plays Theseus, a peasant content to live a life of unassuming anonymity keeping a watchful eye on his mother. His focus is daily survival, not war. But when power-hungry King Hyperion (Mickey Rourke) invades his village in search of a weapon of mythical power, Theseus is forced into action-and thankfully he's been trained by an old man (John Hurt) whose true identity is none other than the king of the gods, Zeus (Luke Evans), who long ago swore off outwardly meddling in human affairs. Theseus slowly assembles a ragtag group of allies that include Stavros (Stephen Dorff) and a priestess named Phaedra (Freida Pinto). But when Hyperion obtains the Epirus Bow and decides to use it against his enemies, the gods are forced to decide whether or not to intervene and save humankind from itself.

Given the participation of 300 producer Mark Canton, the muscles, and the ancient Greece setting, it's easy to dismiss Immortals as a superfluous knockoff with more style than substance. But where Zack Snyder's film owes its look to a visceral combination of Frank Miller's iconic source material and the director's own cinematic excesses, Tarsem's film is steeped in capital-A art. Even as he sets up nasty modern fights, The Cell director invokes the staging and detail of classical artwork. The framing is painterly, the colors are vivid and the choreography is mythic. The visuals aren't just "cool," each shot directly serves the story while giving the viewer something memorable—and better yet, emotionally provocative—to grok.

Although I'm a fan of his two previous films, The Cell and The Fall, it's fair to say that in the past Tarsem sometimes actively encouraged his visuals to overshadow his stories. But his use of filters and camera techniques is never an end unto itself—he uses his stunning toolbox to create atmosphere and character. (Audiences looking for Snyder-style speed-ramping will find that Tarsem uses it sparingly, and less as a self-celebratory flourish than an integral—and awesomely entertaining—example of power, prowess and skill.) The result is an irony-free, magnificently epic style, a hero's journey that's transcendent yet populist.

Cavill is in the unusual position of being better known for an unreleased project—Zack Snyder's Man of Steel—than his current ones. But as he defines his career, Cavill showcases the rugged yet refined masculinity that makes him an ideal leading man. And in Immortals, he proves that has the personality and talent to back it up. While his fellow actors are clearly either peasants or superheroes from the start, he transitions from one to the other with naturalness and believability. Looking good even when he's covered from head to toe in oil, he has a commanding presence and an ease with the formalities of the film's necessarily melodramatic dialogue that never sounds self-aware or silly.

Meanwhile, Evans plays Zeus as an unexpectedly tormented ruler who presides over gods who oddly aspire to be men, even as men aspire to be gods. His struggles with how much (if at all) to intervene in the human war, show the need to preserve the order of this mythical world. Meanwhile, Mickey Rourke's intimidating offscreen presence gives Hyperion's maniacal ambition surprising credulity—he's more practical than he is one-dimensionally villainous. And as the priestess Phaedra, Freida Pinto's incomparable beauty slowly reveals a sophisticated, thoughtful female character desperately yearns to discard her hermetic purity and experience the world in all of its messy mundanity.

Immortals shouldn't be mistaken for unwarranted self-seriousness or frivolous pageantry—this is theatrical adventure shot through with a sincere appreciation for myth-making. Though Tarsem doesn't have the cache of a David Fincher or Zack Snyder, his distinctive style has crossover potential if he continues to find projects that marry his ornate, high-minded sensibility to a more conventional story. If the key to immortality is living a life worth remembering, Tarsem is well on his way, because Immortals is beautiful, smart and emotionally engaging—a combination is as memorable as it is entertaining.